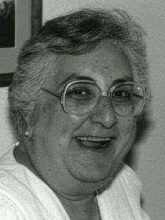 Former Kingston, NY resident Adele Tutter, widow of deceased Antonin Tutter, died on November 20, 2007 in her home at 9A Old Ashby Road in Mason, NH. She was 75 years of age. Adele Tutter leaves her four children, Catherine Tutter, Dr. Adele Tutter, Mary McDonald, and Dr. Anton Tutter, and seven grandchildren; Nadia Friedler, Kaspar and Ursula Hudak, Max and Mason McDonald, and Magdalena and Isadora Tutter. Adele Tutter was born on October 26, 1932 in New York City to Frederick Chambart and Kathryn Sadaka Chambart. She graduated from St. John’s University in New York City’s Queens borough at the young age of 18 with a degree in Pharmacy. She began her career as a pharmacist at Mary Immaculate Hospital in Jamaica, NY. Adele Marie Chambart married Antonin Tutter, a Czech immigrant, on June 15, 1957 at St. Anselm’s Church in Bay Ridge, Brooklyn, where she and her husband raised their young children. In 1970 Adele and her family moved to Kingston, NY and established their residence at 155 Pearl Street. During this time and extending through the 1980s, Adele became deeply involved in the life of her Catholic parish, St. Joseph’s, serving as a Eucharistic minister and an active member of the parish council. Adele devoted countless hours to charity and volunteer work. Organizations with whom Adele was affiliated include the Guild of the Handicapped, where she was President from 1978-1988. As the Guild’s President, Adele organized and led a community of members at quilting bees to raise funds for organizations such as the Children’s Rehabilitation Center. Adele was also an active volunteer for People’s Place, a local soup kitchen and donation center serving the needy. In 1989 Adele and her husband established a year-round residence at their seasonal home in the western Catskills town of Bloomville, NY, where they had spent summers since 1965. In the Fall of 2000 they relocated to Mason, NH to live closer to their children and grandchildren. Adele took particular delight in her grandchildren, who figured prominently in her life. A wake will be held on Friday, November 23 from 2-4 pm and from 7-9 pm at Simpson-Gaus Funeral Home, 411 Albany Avenue, Kingston, NY. On Friday evening, at 8:00 PM, a vigil service will be conducted at the funeral home. A Funeral Mass will be celebrated at 10 am on Saturday, November 24 at St. Joseph’s church, 242 Wall Street, Kingston, NY. A reception will follow at Guido's, 812 Ulster Avenue, Kingston. A private burial service will take place at 11 am on Sunday, November 25 at Riverside Cemetery, Bloomville, NY. In lieu of flowers, donations may be made to the Mason Volunteer Fire and EMS Department, 101 Depot Rd, Mason, NH 03048 or The People's Place, 620 Broadway, Kingston, NY 12401.
To order memorial trees or send flowers to the family in memory of Adele Marie Tutter, please visit our flower store.