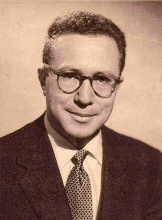 Dr. Albert Tannin of Wittenberg Road, Bearsville NY died January 8, 2011 at his home in Mission Viejo, CA. Al was born to the late Benjamin and Eva Tannin in New York, NY. He received a Bachelor of Arts degree from New York University, and a Master of Education from there following his service in the Third Army infantry during World War II, where he fought in the Battle of the Bulge. He taught elementary school in Bedford-Stuyvesant, where he met his late wife, Harriet. The couple married in 1951, and moved to Lausanne, Switzerland shortly after, where Al studied and received a Doctor of Medicine at the University of Lausanne. Following graduation, they moved back to the New York area while Al completed his medical training in orthopedic surgery. He moved to Kington in 1965, where he joined an orthopedic practice with Dr. Joseph Conrad, and practiced in Kingston until the mid 1990's. Dr. Tannin was a well known physician on the staff of both Kingston Hospital and Benedictine Hospital, where he served for a time as chief of surgery. He was a Fellow of the American College of Surgeons. He took a strong interest in medical education, traveling to Israel to offer free medical clinics in association with Hadassah Hospital in Jerusalem. He brought medical residents to Kingston as part of a training program he participated in with the Hospital for Joint Diseases in NY, and taught in orthopedics at the Albany Medical Center. He also authored a chapter of an orthpedic text book on the foot and ankle. He was a strong supporter of the New York State Police, and was made an honorary State Police Surgeon. Al moved from Kingston to Bearsville with his wife, who was a well known artist in Woodstock. He used to joke that he had become a 'patron' of the arts, but in fact his gregarious personality and cheerfulness quickly made him a welcome member of Woodstock society. He took a strong interest in his wife's work, the Woodstock Artist's Association and the Woodstock Center for Photography. His work in Israel had interested him in the "chamsa", a good luck amulet in the form of a hand, which is common to Judaism, Christianity and Islam. The hand shape was a fortuitous connection to his career in orthopedics, and he assembled a good collection of different chamsas, as well as commissioning chamsas by Woodstock artists. Al also had a strong love of children, and volunteered in tutoring children in Hebrew at the Woodstock Jewish Congregation, and in the foster grandparent program at Temple Menorah in Redondo Beach CA. He is missed by his sons Mark of Redondo Beach California and Bruce of West Hurley, grandchildren Alexis of Anaheim CA and David of Santa Barbara CA, his brother Seymour of Petah Tikvah Israel, and numerous nephews, nieces, great-nephews and great-nieces. Funeral Services will be conducted Thursday at 12:00 at the Simpson-Gaus Funeral Home, 411 Albany Avenue, Kingston. Rabbi Didi Thomas will officiate. Interment, in the Artist's Cemetery, will be private. Memorial Contributions may be made in lieu of flowers to either the Woodstock Artists Association, 28 Tinker St Woodstock, NY 12498, Temple Emet, 500 Calle Mayor, Redondo Beach CA 90277 or Congregation Ahavath Israel, 100 Lucas Ave Kingston, NY 12401.
To order memorial trees or send flowers to the family in memory of Albert H. Tannin, please visit our flower store.