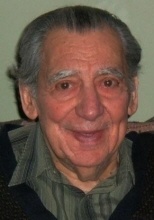 Angel Ozores, 92, of Lake Katrine, died Saturday, May 18, 2013 at Ten Broeck Commons Nursing Home. Born in Ponce, Puerto Rico, he immigrated to the United States when he was four years old. Angel worked his way up from a dishwasher to become the Head Chef at Manufacturer's Hanover Trust Corporate Headquarters in New York City for 35 years. He was an avid bowler and loved to vacation in Miami, Florida, with his family each year. Angel is survived by two sons, Richard Ozores and his wife Lori Petramale-Ozores of Kingston, Roberto Ozores of Montreal, Canada, a sister, Esther Rivera of New York City, Three grandchildren, Richard Ozores, Lisa Ozores Brown, Sarah Everts and one great grandson, Caleb He was predeceased by his loving wife of 57 years, Dolores Bisbal Ozores, who passed in 1996. Reposing at the Simpson-Gaus Funeral Home, 411 Albany Ave. on Wednesday, May 22, 2013 from 5-7 PM. A Funeral service will take place at the funeral home on Thursday at 10:00 AM. Interment will follow in St. Raymond's Cemetery, Bronx, NY. Angel was well known for his constant generosity and desire to help those in need, therefore, the family requests that memorial donations be made to The Kingston Hospital Foundation for The Kingston Hospital Employee Assistance Fund, 396 Broadway, Kingston, NY 12401.
To order memorial trees or send flowers to the family in memory of Angel Ozores, please visit our flower store.