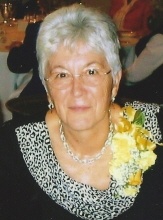 Anneliese Mossl, 77, of Sawkill, died Thursday, February 26, 2015 at HealthAlliance Hospital Broadway Campus. Anneliese was born in a section of Germany called Silesia, which was transferred to Poland at the end of 1945. She was a daughter of the late August & Else Ruerhdich Dienst. Ultimately, she and her parents settled in Hannover. Her family was one of many that was divided by the post-war partition of Germany. Her sister Maria and family remained in East Germany. In 1957, Anneliese and her cousin Traudel Hertrampf, left Germany for a long-term visit to relatives in Sawkill, where she met her future husband Ernst. Anneliese loved traveling, especially back to Germany. After the fall of the Berlin Wall, when travel to the east block was again allowed, she visited Silesia often. Although she missed her ancestral home, she was happy in the United States and extremely proud of her children and grandchildren, whom she taught about her culture in many ways. She and Ernst raised their children to be bi-lingual, and instilled in them an ethic of hard work and perseverance. She was a master at the "old country crafts" including embroidery, knitting and crocheting, gardening, canning and pickling and she passed these skills on to her children and grandchildren. Anneliese also loved summers at northern Lake George, where she and Ernst spent time with children and grandchildren. She was very much looking forward to great grandchildren and we expect her to be proudly looking down upon them when they arrive in the coming years. Anneliese is survived by her loving husband of 55 years, Ernst Mossl of Sawkill, whom she married on July 19, 1959, two daughters, Lt Col (Ret) Barbara Mossl Claunch and her husband Jon of Theisbergstegen, Germany, Dr. Andrea Mossl Noel and her husband Jeff of New Paltz, NY, a son, Rev. Ernst A. Mossl and his wife Theresa Ruth of Modena, NY, eight grandchildren, Adam, Corinna, Audrey, Natasha, Conrad, Erin, Katie and Sophia. One very special cousin, Irene McInnis from Sawkill, and several dear cousins in Germany also survive. In addition to her parents, Anneliese was predeceased by her sister, Maria Kleinert and her brother Norbert Dienst. Anneliese will be reposing at the Simpson-Gaus Funeral Home, 411 Albany Ave on Wednesday, March 4, 2015 from 2-4 and 7-9 PM. The funeral procession will form on Thursday from the funeral home at 9:00 AM. A Funeral Mass will be celebrated at 10:00 AM at St. Joseph Church in Kingston. Interment will follow in St. Ann's Cemetery, Sawkill. The family requests that memorial donations be made to the Lake George Land Conservancy at www.lglc.org under the "make a tribute" page or send a donation in Anneliese's name to LGLC at P.O. Box 1250, Bolton Landing, NY 12814 or Ovarian Cancer Research Fund, 14 Pennsylvania Plaza, Suite 1710, New York, NY 10122.
To order memorial trees or send flowers to the family in memory of Anneliese Mossl, please visit our flower store.