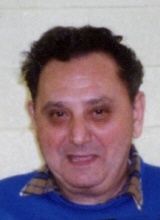 Anthony D. Secreto, 84, of Glasco, died January 19, 2015 at Golden Hill Health Care Center. Born in Glasco, he was a son of the late Charles Secreto & Rose Petramale Secreto. He was a veteran of the US Army having served during the Korean Conflict. He was a custodian first for IBM and then for the Kingston City Schools at Miller Middle School. Tony was an avid New York Yankee fan who never missed watching a game. Tony is survived by his brother-in-law, Michael Cacchillo of Port Ewen, three nieces, Michele Funccius and her husband Hans of Kingston, Debra Cacchillo of Port Ewen and Gina Zamiskie and her husband Edward of West Caldwell, NJ, three great nieces, Emma Roszko, Madeline Roszko and Rebecca Zamiskie and one great nephew, Charles Zamiskie. In addition to his parents, Tony was predeceased by his wife of 56 years, Gloria Wynne Secreto, whom he married in 1951 and who passed in 2007, his infant son, Charles Secreto and his sister, Genevieve Cacchillo. Tony will be reposing at the Simpson-Gaus Funeral Home, 411 Albany Ave on Friday, January 23, 2015 from 3-7 PM. The funeral procession will form from the funeral home on Saturday at 9:00 AM. A Funeral Mass will be celebrated at 10:15 AM at St. Joseph's Church in Glasco. Interment, with military honors by Joyce-Schirick Post 1386 Color Guard, will follow in St. Mary of the Snow Cemetery.
To order memorial trees or send flowers to the family in memory of Anthony D. Secreto, please visit our flower store.