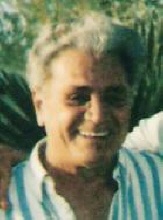 Anthony 'Bo' Crispino of Seven Greens Apartments died Thursday, April 5, 2007 at his home. He was 87. Born in Kingston Point on September 29, 1919, a son of the late John and Angeline Naccarato Crispino. A US Air Force veteran of WW II from 1941 - 1945, he was a drill instructor and Military Policeman. He received the American Defense Service Medal, American Theater Ribbon and Victory Medal. He was a member of the American Legion Post 150, Kingston. A baker by trade, he first worked at Serotta's Bakery and then at Spiesman's Bakery, Kingston. In 1952 he moved to Miami Beach and then Dunnellon, Florida. He worked as a baker in Florida. In 2002 Mr. Crispino returned to Kingston and lived at Seven Greens. Surviving are two daughters Toni Ann Crispino of Hackensack, NJ and Annette Van Aperloo of Queensbury; three sons Ronald Crispino of Hackensack, NJ; and Richard Crispino of California, and Christopher Crispino of Chicago, IL; 4 grandchildren, three sisters Theresa Glassman of Kingston, Mary Crispino of Town of Ulster, Carmella Del Torto of Town of Ulster, three brothers John Crispino of Arkansas, Raymond “Chippy” Crispino of Kingston, and Ronald Crispino of Florida; many nieces and nephews; and his best friends Peter Fabbie and Dominick Perry. One brother Joseph Crispino and one sister Rose Baccuci both died previously. Reposing at the Simpson - Gaus Funeral Home, 411 Albany Ave. on Monday from 8:30 AM. A Funeral Mass will be celebrated at St. Joseph's Church at 10:00 AM. Inurnment will be in St. Mary's Cemetery on Thursday at 12:00.
To order memorial trees or send flowers to the family in memory of Anthony M. Crispino, please visit our flower store.