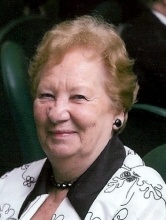 Barbara Ann (Countryman) Binney, of Boynton Beach, FL, formerly of Kingston, died Aug. 1, 2014, peacefully at home after a long illness. Born in Accord, she was a daughter of Floyd D. and Florence Ford Countryman. Barbara was a great wife and mother who loved her family and friends. She greatly enjoyed helping her son, Jay cater for Mr Big Bellys in Kingston. She and her husband managed Bob Steeles motel for many years and also enjoyed working for Bob Carlzon at State Farm insurance. Barbara and Jim were the original owners of the Grand Slam bar and restaurant. She was also an avid reader. Barbara is survived by her beloved husband of 54 years, James M. Binney, whom she married on June 12, 1961, a daughter Sue Herwig and her husband Ed of Kingston, two sons, Jay M Binney and his wife Brenda of Kingston, and James (Doak) Binney and his wife Betty of Kerhonkson, Seven grandchildren, Douglas and Leslie Herwig, Jennifer, Jay Jr (LJ), and Justin Binney, Ian and Logan Binney, one great granddaughter Hailee Binney. Barbara is also survived by two sisters Betty Roxby and Carol DiVita, three brothers Floyd, Richard and Ronald Countryman. Many nieces and nephews also survive. The family will receive friends at the Simpson-Gaus Funeral Home, 411 Albany Ave on Saturday, September 13, 2014 from 1-5 PM. The funeral service and interment were privately held in Florida. The family requests that memorial donations be made to the Hospice of Palm Beach County Foundation, 5300 East Ave, West Palm Beach, FL 33407
To order memorial trees or send flowers to the family in memory of Barbara Ann Binney, please visit our flower store.