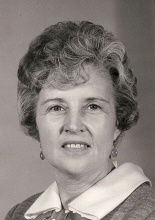 Beatrice Tresaloni, 97, a lifelong resident of Rifton, died Thursday, January 29, 2015 at Ten Broeck Commons. Born in Rifton, Bea was the daughter of the late Paul & Lena Eckert Bailey. She worked for Hercules for 34 years, was a member of Trinity Lutheran Church and the Town of Esopus Senior Citizens. She was an avid reader and loved to knit sweaters and blankets for her great grandchildren. Bea is survived by her husband of 30 years, Nicholas Tresaloni of Rifton, whom she married on December 22, 1984, a daughter, Beverly Kelly and her husband James of Maine, three grandchildren, Mrs. Jamison "Jami" Ream, David Kelly, and Julianne Lopez. Seven great grandchildren, one great-great granddaughter and many nieces and nephews also survive. In addition to her parents, Bea was predeceased by her first husband, Warren R. Neer Jr., who died in 1978, four brothers, Harold, Edward, Watson and Walter Bailey. Bea will be reposing at the Simpson-Gaus Funeral Home, 411 Albany Ave on Sunday, February 1, 2015 from 1-4 PM. A Funeral Service will be conducted on Monday at Trinity Evangelical Lutheran Church at 10:00 AM, with Pastor Paul Britton officiating. Interment will follow in Rosendale Plains Cemetery.
To order memorial trees or send flowers to the family in memory of Beatrice Tresaloni, please visit our flower store.