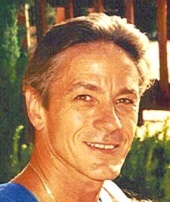 Charles P. “The Jet” Revty, of Holland Drive died Thursday, December 2, 2004 at his home. He was 56. He was born in Atlantic City, NJ on May 30, 1948, a son of the late Sam Revty and Billie Duncan Snellings Revty. A 35-year area resident, Mr. Revty first worked at Lake Minnewaska. He was currently self employed as a residential caretaker in the Woodstock area. He is survived by his Significant Ex and mother of Jeri and Aliyah, Laurie Gruberg; three daughters Jeri and Aliyah Gruberg-Revty and Katheryn Wood and her husband Bill; one sister Michael Beebe, one brother Mike Revty, two grandchildren William and Sophia Wood, one aunt Jewette “GG” Wilson; beloved friends Michael and Abby Spencer. Several uncles, cousins, nieces and nephews also survive. One brother, Phillip Revty died previously. With all our love you are on your way home to rejoin your beloved soulmates Itar and Frank. A service of remembrance will be conducted on Sunday at 10:00 AM at Simpson – Gaus Funeral Home, 411 Albany Ave. Rabbi Yael Romer and Rev. Martha Davis will officiate. Donations may be made to a charity of choice.
To order memorial trees or send flowers to the family in memory of Charles Phillip Revty, please visit our flower store.