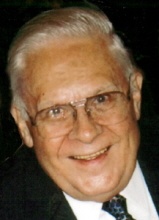 Donald J. Draminski of Stone Ridge Court, Woodstock died Thursday, August 2, 2012 at Kingston Hospital. He was 81. He was born in Ludington, Michigan, a son of the late Walter and Veronica Rudnicki Draminski. Following the death of his father and his mother's illness, he lived with his aunt Sophia and uncle John Draminski. A US Army veteran during the Korean Conflict, Don served in Japan from 1953 1956. He then graduated Michigan State University in 1961 with a bachelor's degree in Electrical Engineering. After moving to the Kingston area in 1961, Don met his future bride, Margaret "Betty" Jordan. They married on October 27, 1962. Don began a thirty year career at I.B.M., Poughkeepsie and Kingston as an electrical engineer. He retired in 1991 as a computer programmer and belonged to the Quarter Century Club. They moved to Woodstock in 1971 where Don became an active parishioner of St. John's RC Church in West Hurley. Don was a lector, Eucharistic minister, daily communicant, past parish council president and finance committee member. Beloved husband of Betty Jordan Draminski; loving father of Donna Jutras and her husband Mark of Upton, Mass., Debra Hanley and her husband Mark of Kingston; grandfather of Erica Jutras, Daniel Russell, Cheyenne and Kenneth Hanley; brother of Stanley Draminski, Evie Pilarski, Clara Truskoski and Helen Borsum, all of Michigan and the late Lucia Cantor, and Walter Draminski who died in childhood. Many nieces and nephews also survive. Reposing at the Simpson Gaus Funeral Home, 411 Albany Ave. on Sunday from 3:00 7:00 PM. The funeral procession will form on Monday at 9:00 AM from the funeral home. A Funeral Mass will be celebrated at St. John's RC Church at 10:00 AM. Interment will follow in St. Mary's Cemetery. In lieu of flowers, memorial contributions may be made to St. John's RC Church, 12 Holly Hills Drive Woodstock, NY 12498.
To order memorial trees or send flowers to the family in memory of Donald Joseph Draminski, please visit our flower store.