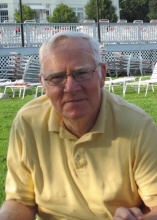 Edward R. McNulty, 79, of Shokan, succumbed to complications of heart failure on August 9, 2015 with his family at his side, maintaining his tremendous will and dry wit until the very end of his physical journey. The second oldest of 10 children, he was born during the Great Depression in Buffalo, New York. He spent his childhood in Java Center, a small farming town in western New York, where he worked on the family farm and helped his father, superintendent of highways and a teacher. Ed was also very involved in taking care of his many loving siblings. An outstanding student with a tireless work ethic, he largely put himself through college at Saint Bonaventure University and the University of Detroit, where he completed a bachelor's degree in electrical engineering. Following college, he began a long career at IBM that included being granted several patents for components of large, mainframe computers. However, the main focus of his life always remained his family. Ed began his 49 year marriage to his beloved wife Cheryl on July 16, 1966 in New Hyde Park, New York, and spent the rest of his life living in the beautiful Catskill Mountains of upstate New York, where he and Cheryl raised four children, Edward, Mark, Kathleen, and Matthew. Along with his love of nature and the outdoors, he shared many diverse interests and activities with his family, including amateur astronomy, photography, electronics and repairing unreliable automobiles. He was very active in his community, serving as the Scoutmaster of Boy Scout Troop 63, a fundraiser for Catholic Charities, and a leader in the Catholic Committee on Scouting. With great personal sacrifice, he and his wife Cheryl were able to provide each of their children with outstanding educations. He displayed remarkable and inspiring resilience in confronting several major medical challenges, including a heart attack and quintuple bypass surgery followed by a near fatal fall from a tree three years later that resulted in a crippling shoulder injury. Throughout it all and with the tremendous support of his wife, he never complained nor lost his resolve to recover and maintain as much physical function as possible, including his passion for golf. Perhaps his most impressive fight of all was that against depression, which he battled intermittently for much of his adult life. Along with his resolve and perseverance, he also maintained a wonderful sense of humor as well as his fascination for the beauty and mysteries of life. His grace and humility touched all who knew him. He found satisfaction in simple pleasures, took very little for granted and had an enormous, kind and generous heart. He was a devout Roman Catholic for his entire life, and found tremendous comfort in his faith. In addition to his wife and four children, he is survived by siblings Mary Jane, Robert, Daniel, Alice, Phillip, David, Jean, Margaret, Eileen and grandchildren Fiona, Ian, Conor, Emma, Harrison, and Shane. He will be dearly missed. A funeral service will be conducted at St. Patrick's Church in Java Center, NY on Saturday, October 3, 2015 at 11:00 AM. Inurnment will follow in the family plot in St. Patrick's Cemetery. Simpson-Gaus Funeral Home, 411 Albany Ave, is honored to assist the family with the arrangements. In lieu of flowers, donations in his memory to the Helen Hayes Hospital Foundation, supporting a remarkable place for healing that helped him so very much, would be most appreciated. http://www.hhhfoundation.net/shop/donation-in-honor-or-memory/
To order memorial trees or send flowers to the family in memory of Edward R McNulty, please visit our flower store.