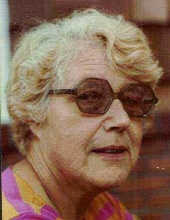 Eleanor I. Wilson of Valentine Avenue, Kingston died Friday, September 23, 2005 at Benedictine Hospital. She was 84. She was born in Belfast, Northern Ireland on April 11, 1921, a daughter of the late Archibald and Rose Brolly Darragh. Mrs. Wilson immigrated to this country in 1946 and settled in Huntington. She then lived in Southampton for 35 years and worked as a Registerd Nurse at Southampton Hospital in pediatric nursing. Mrs. Wilson then moved to Bradenton, Florida and worked at Blake Hospital and then at Freedom Village Retirement Center. A former member of the Daughters of American Veterans, she retired as a Registerd Nurse at age 83. She was predeceased by her former husband Harold 'Tiny' Wilson. Two brothers Leonard and Louis Darragh and five sisters Joy Letora, Sr. Kathleen Tarsicious Darragh, Dolly Monaghan, Vera Kelly and Isabelle Darragh all died previously. Surviving are two sons Stephen H. Wilson and his wife Judy, and Harold H. Wilson and his wife Donna, all of Southampton; two daughters Nona J. McKeever and her husband Christopher, of Kingston and Cathleen M. Wilson and her husband Robert of Casper, WY; twelve grandchildren Matthew, Stacy and Ryan Wilson, Catharine, Elizabeth and Christopher McKeever, Janice Shisler, Bryan and Thomas Burke, Lauren, Richard and Catlin Wilson; five great grandchildren Allan and Alixandra, Brandon, Tyler and Alexandra Whisler; many nieces and nephews throughout Europe. Reposing at Simpson - Gaus Funeral Home, 411 Albany Ave. on Saturday from 6:00 - 8:00 PM. Contributions in Eleanor's memory may be made to the Salvation Army, 35 Cedar St., Kingston, NY 12401.
To order memorial trees or send flowers to the family in memory of Eleanor I. Wilson, please visit our flower store.