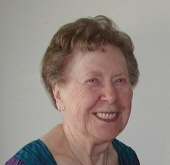 Elizabeth ("Betty") Amundsen, 91, of Kingston, died Friday, April 29, 2016 at her home. Elizabeth was born in London, England, and grew up during World War II. She met her husband Alf, an American soldier on temporary leave in London awaiting orders to invade France. Married in 1945, she immigrated to the US a year later, along with many other war brides. She was excited to start her new life, but certainly it meant leaving any family or friends she had behind. They settled in NJ, and raised two children. Betty worked as a key punch operator in England, and continued doing that when she arrived in her new home. Between she and her husband, they worked together to provide for their family. They later moved to Florida, where she continued working for the City of New Port Richey. She lived there until moving back to NJ in 2007. She then moved to Kingston NY in 2013, where she enjoyed living in the Birches at Chambers. Although a very quiet person, Betty had strong determination and fortitude to do whatever she needed. She maintained lifelong friendships, and taught her family about values, responsibilities, and character. Her interests were crossword puzzles, mystery novels, board games and knitting. For about 20 years she knitted over 300 baby blankets that were donated to new moms. It was a joy for her to receive the many photos of little ones and cards from grateful moms. Elizabeth is survived by her daughter, Norma Kratt and her husband Edward of Kingston, a daughter in law, Marilyn Amundsen of Holiday, FL, five grandchildren, Cynthia Caroline, Ingrid Nichter, Erik Amundsen, David Kratt and Erin Corcella, six great grandchildren, Andrew Kratt, Zoye Caroline, Tyler Kratt, Adeline Nichter, Juliana Corcella, Dominick Corcella. Elizabeth was predeceased by her husband of 52 years, Alf Amundsen who passed in 1997 and a son, Paul Amundsen, who passed in 1999. Elizabeth will be reposing at the Simpson-Gaus Funeral Home, 411 Albany Ave on Tuesday, May 3, 2016 from 1-4 PM. A Funeral Service will be held at 4:00 PM at the funeral home. Interment will be held privately. In lieu of flowers, the family requests that memorial donations be made to Hudson Valley Hospice, 400 Aaron Ct, Kingston, NY 12401.
To order memorial trees or send flowers to the family in memory of Elizabeth "Betty" Amundsen, please visit our flower store.