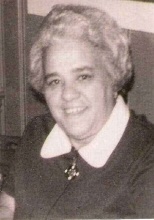 Emma Perry DeGregoria of Route 32, Glasco died Tuesday, March 6, 2007 at Ferncliff Nursing Home. She was 88. She was born in Glasco on July 7, 1918, a daughter of the late Joseph and Pasqualina Rienzo Perry, Sr. A lifelong parishioner of St. Joseph's Church, Glasco, Emma was an active member of the Ladies Society of Santa Maria, Kingston Point. A member of the Glasco Fire Department Ladies Auxiliary, she was instrumental in fund raising. Her husband Philip A. DeGregoria died January 24, 1990. Four brothers Michael, Samuel, John and Joseph Perry Jr., and one sister Fanny Turck all died previously. Surviving are her daughter Phyllis Ann Lawson and her husband Gail of Saugerties; one grandson Joseph M. Clausi III and his wife Missy of Salt Lake City, Utah, three great grandchildren Joseph M. IV, Milan and Marli Clausi, all of Salt Lake City, Utah; four sisters Elizabeth Augustine of Kingston, Marge Hardie of Woodstock, Flo Franzese of Cooper City, Florida, and Anne Greco of Lake Katrine; many nieces and nephews. Reposing at the Simpson - Gaus Funeral Home, 411 Albany Ave. on Thursday 7-9 and Friday 2-4 and 7-9 PM. The funeral will be Saturday at 9:00 AM from the funeral home. A Funeral Mass will be celebrated at St. Joseph's Church, Glasco at 10:00 AM. Interment will be in St. Mary of the Snow Cemetery, Barclay Heights.
To order memorial trees or send flowers to the family in memory of Emma Perry DeGregoria, please visit our flower store.