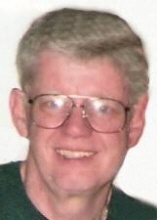 Eugene F. Van Steenburg of East Chester Street, Kingston died Wednesday evening, October 18, 2006 at his home. He was 62. A native and lifelong Kingston resident, he was born August 14, 1944, a son of the late Eugene F. and Dorothy Simpson Van Steenburg, Sr. A graduate of Kingston High School, he married Teri Tresaloni on December 6, 1964. He worked at Electrolux, Telrad and JVS Graphics. For 28 years Mr. Van Steenburg was an electronic technician at I.B.M., Kingston. He retired in 1993. Eugene was an avid bowler and NASCAR fan. Surviving are his wife of 41 years, Teri Van Steenburg; one son Mark Van Steenburg of Saugerties, one daughter Tracy Kilfoyle and her husband James of Kingston; two sisters Bonnie Breitenstein and Peggy Van Steenburg, both of Kingston, two brothers Jerry Van Steenburg of Kerhonkson and Russell Van Steenburg of Town of Ulster; grandfather of Kyle Carnright, Jordyn Kilfoyle, Adrienne Van Steenburg and Corey Kilfoyle, several nieces and nephews. Reposing at the Simpson - Gaus Funeral Home, 411 Albany Avenue on Sunday 2-4 and 7-9 PM. The funeral will be Monday at 9:15 AM from the funeral home. A Funeral Mass will be celebrated at St. Mary's Church at 10:00 AM. Contributions, in Eugene's memory, may be made to Hospice, Inc., 34 Broadway, Kingston, NY 12401.
To order memorial trees or send flowers to the family in memory of Eugene F. Van Steenburg, please visit our flower store.