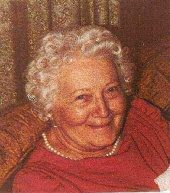 Frances E. Perry of Abruyn Street, Kingston died Tuesday, May 01, 2012. She was 98. A native and lifelong Kingston resident, she was a daughter of the late Anthony and Josephine Dawnorowitz. At the time of her death, Frances was the oldest living member of the Ladies Society of Santa Maria. She was a parishioner of St. Mary's Church. Beloved wife of the late Samuel Perry; mother of Samuel A. "Tate" Perry of Kingston and the late Kenneth Kouhoupt, grandmother of Kenneth Kouhoupt, Karen Aubel, Kevin Kouhoupt, Kimberly Hart, Keith Kouhoupt Dena Deising and Marlene Perry; great grandmother of Kristen Kouhoupt, Shannon Hart, Kerrie-Lynn Hart, Thomas Aubel, Matthew Aubel, Kenneth Kouhoupt and Peter Deising, two great-great grandchildren, Brady Phillips and Rosalie Aubel. Several brothers and sisters and many nieces and nephews. Reposing at the Simpson - Gaus Funeral Home, 411 Albany Ave. on Thursday, May 3, 2012 from 2-4 and 7-9 PM. The funeral procession will form at the funeral home on Friday at 9:00 AM. A Funeral Mass will be celebrated at St. Mary's Church at 10:00 AM. Fr. Frank Damis will officiate. Interment will follow in St. Mary's Cemetery.
To order memorial trees or send flowers to the family in memory of Frances E. Perry, please visit our flower store.