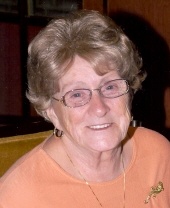 Frances "June" Carrubba, 84, died, Saturday, May 27, 2017 at her home. Born in Tribes Hill, NY, she was a daughter of the late Peter & Frances Dempsey Murphy. June was a life-long Kingston area resident, growing up in the Rondout section, as her family operated river barges, hauling freight from NYC to the Buffalo/Great Lakes region. She attended Kingston High until she started her career as a seamstress in local Kingston factories. June married the love of her life, Joseph C Carrubba ("Buddy"), in 1953, who died two months shy of their 50th Wedding Anniversary. They started raising their family in 1956. June later specialized in sewing custom draperies, eventually starting her own successful business, providing products directly to the public or working in conjunction with the finest interior decorators in the region. June was well traveled, having lived in Europe in 1970, and returned numerous times to view the best cities and countries on the continent. She loved cruising on the large ships, and visited most of the islands in the Caribbean. June was very proud to be able to see Ireland on one of her trips, and explore some of her family history. In addition to her career, June was a beloved wife, mother, grandmother, great grandmother, friend and sibling. She was also an excellent homemaker, accomplished cook and always retained her interest in the latest decorating designs. June is survived by her three sons, Joseph Carrubba and his wife Barbara of Saugerties, James Carrubba and his wife Debra of Ruby and John Carrubba of Catskill, a sister, Rosemary Allen and her husband Frank of Kingston, four grandchildren, Christine, Joseph, James and Hope, two great grandchildren, Abby and Grayson. Several nieces and nephews also survive. In addition to her parents, June was predeceased by her husband, Joseph C. Carrubba, who passed in 2002 and four siblings, Peter Murphy, Jackie Murphy, Elizabeth Gardner and William Murphy. June will be reposing at the Simpson-Gaus Funeral, 411 Albany Ave on Wednesday, May 31, 2017 from 2-4 and 7-9. The funeral procession will form from the funeral home on Thursday at 9:00 AM. A Funeral Mass will be celebrated at 10:00 AM at St. John's RC Church, West Hurley. Interment will follow in St. Mary's Cemetery.
To order memorial trees or send flowers to the family in memory of Frances "June" Carrubba, please visit our flower store.