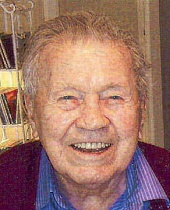 Frank A. Legac of the Town of Ulster died Friday, May 11, 2012 at Kingston Hospital. He was 96. He was born in Everett, PA, a son of the late Andrew and Anna Suba Legac. He was a graduate of St. Agnes Convent, Sparkill, NY. Mr. Legac received certification as an electronics technician at the Delehanty Technical Institute of New York City. He worked for the Civilian Conservation Corps in forestry and the prevention of soil erosion. He also worked for Majestic Corp. in New York City as a television troubleshooter. A US Army veteran of WW II, Mr. Legac served as Staff Sergeant in the Pacific Theater of Operations. He was awared a Silver Star Citation and two Bronze Stars. While home, on leave, he married Vincenza "Vivian" Venturella on April 8, 1945. An area resident since 1955, Mr. Legac worked at I.B.M., Kingston as an electronic technician for 26 years. He retired in 1980 and belonged to the Quarter Century Club. He was a member of the First Capital Travel Club. He enjoyed traveling and reading. Beloved husband of Vivian Legac who died February 4, 2010; loving father of Dianne Devine and her husband Daniel of Kingston; loving grandfather of Danielle Devine, Drew Devine and his wife Monique; brother of Catherine "Kay" Inovejes of California and the late Paul, Anthony 'Tony", Joseph "Joe" and Caroline Legac, Mary Sprucebank and Anna Vera Krachi; uncle of Paul Legac and great uncle of Maureen Legac Berson and Francis Legac. Many nieces and nephews also survive. Reposing at the Simpson - Gaus Funeral Home, 411 Albany Ave. on Friday from 10:00-11:00 AM. The funeral cortege will then process to St. Joseph's Church for an 11:30 AM Funeral Mass. Entombment, with military honors by Joyce-Schirick Post #1386 Color Guard, will follow in Wiltwyck Community Mausoleum. In lieu of flowers, the family suggests memorial donations to the Activities Fund at the Hudson Valley Senior Residence, 80 Washington Avenue, Kingston, NY, 12401.
To order memorial trees or send flowers to the family in memory of Frank A. Legac, please visit our flower store.