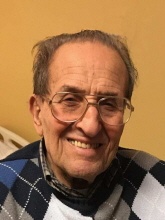 Frank Anthony Serravallo Sr., 94 formerly of Saugerties, passed into Heaven on Monday, August 14, 2017, at Foothill Acre Rehabilitation and Nursing Home in New Jersey. Frank was born in Glasco, to the late Fortunato and Philomena Serravallo. He was a long time resident of Saugerties where he lived with his wife Vivian of 71 years. Frank began work in The Ice Houses of Glasco followed by work in the brickyards loading boats. He worked in the Kingston dress factory and then became a construction worker where he retired from Callanan Construction. After his retirement he made Christmas wreaths and sold Christmas trees until he was in his late 70s. Frank volunteered in the Glasco Fire Company for over 25 years. He played and managed sandlot baseball, managed Little League and Babe Ruth for fourteen years. He also had a desire in his younger years to be a professional fighter and trained for two and one half years. Frank roller skated, water skied, was an avid fisherman, and was often seen riding his bike around Saugerties. He was an avid hiker with the Rip Van Winkle Hikers Club. Frank started hiking after his retirement at age 73. He climbed 35 mountains over 3500 feet in the Catskills to complete his goal over the age of 80. On August 13, 2005 he had re-climbed all 35 peaks for the third time and he was over the age of 80. Frank looked at life as the glass half full. He did everything enthusiastically and with commitment, especially when it came to his family. One of Frank's greatest joys was to watch his great grandsons play ball at Cantine Sports Arena which was across from his home in Saugerties. Frank was a member of Saint Mary's of the Snow where he had ushered since 1960 and was a head usher for 17 years. Frank leaves behind many happy memories of God, family, and friends. He will be greatly missed but never forgotten. Rest in Peace, Dad. We Love you Forever. Frank is survived by his son, Franko Serravallo, and his daughter-in-law Deborah Serravallo of Arizona, Franko's two daughters, Yvonne Serravallo and Nicole (Serravallo) Jacoby, great grandson, Justin Fredenburg and wife Elisabeth, and great great grandson, Chase, from Connecticut, and great grandson, Jeremy Fredenburg, from Saugerties, Nicole Jacoby and her husband Warren Jacoby of New Jersey and their children, great grandson Zachery and great grand daughter Emily Jacoby. His youngest son, Fred Serravallo, and his wife from New Jersey and Fred's two daughters, Frank's granddaughters, Jennifer and Melissa, and their respective spouses and great grandchildren. In addition to his parents, Frank was pre-deceased by a brother, Santo Serravallo, and four sisters, Mary Misasi, Antoinette McNerlin, Angie Serravallo, and Josie Serravallo. Frank will be reposing at the Simpson-Gaus Funeral Home, 411 Albany Ave, on Thursday, August 17, 2017 from 2-4 and 7-9 PM. The funeral procession will form from the funeral home on Friday at 8:30 AM. A Funeral Mass will be celebrated at 10:00 AM at St. Mary of the Snow Church in Saugerties. Interment will follow in St. Mary of the Snow Cemetery.
To order memorial trees or send flowers to the family in memory of Frank Anthony Serravallo, please visit our flower store.

St. Mary of the Snow