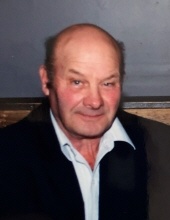 Frank Boice, 88, of Hurley died peacefully January 9, 2022, at Ten Broeck Center for Rehabilitation & Nursing surrounded by his loved ones.

Born in Kingston. He was the son of the late Leland Boice & Leona Wood.

On May 27, 1961, Frank married Veronica (Hormann) and established their home in Hurley where they raised their family and resided for the past 60 years. Frank loved to spend time with his family and friends. He enjoyed being in his workshop in the winter around a wood fire or under his grape arbor in the summer sharing stories. Frank pursued a variety of interests to include hunting, antique car collecting and woodworking. Each year he would grow and nurture his garden, being proud of the tomatoes that were produced. One year, he even grew a pumpkin on a rooftop. Frank was always generous with his time, always willing to help others or be a listening ear.

Frank is survived by his wife of 60 joyful years, Veronica Boice. Frank is also survived by his two children, a son Frank Boice, of North Carolina, and a daughter Robin Stevens and her husband Douglas, of Kingston, five grandchildren, Nikki, Erica, Brittany, Alexandra and Riley, four great-grandchildren, Braison, Camilla, Ezio and Penelope and many nieces, nephews and extended family.

In addition to his parents. Frank is predeceased by his sister Leona Delavan and his great-grandson Carson.

The family will receive friends at the Simpson-Hammerl Funeral Home, 411 Albany Ave, on Tuesday January 18, 2022 from 4PM to 7PM.

The funeral service and interment will be privately held.

Simpson-Hammerl Funeral Home is honored to assist the family of Frank with arrangements.
To order memorial trees or send flowers to the family in memory of Frank Boice, please visit our flower store.