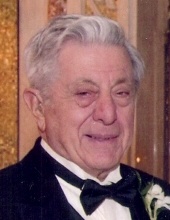 George Thomas of Saratoga Springs, formerly of Kingston, passed away peacefully after a short illness on Wednesday, September 11, 2019 at Ellis Hospital in Schenectady.

Born in Port Chester, NY, he was a son of the late John & Mary Paspati Thomas.

As a young man George worked in his family’s confectionery store in New Rochelle, NY. He served his country during the Korean Conflict in the US Navy. George graduated from Indiana Tech with a degree in engineering. This led to a career with IBM. First working in Endicott, then Kingston and finally in Boca Raton, FL, before retiring after 32 years. His favorite pastimes were fishing, tinkering with anything mechanical and watching football. He was happiest when he was surrounded by his family. George was a devoted Son, husband, father and grandfather. He was a lifelong Orthodox Christian and enjoyed serving in his church community.

In addition to his parents, George was predeceased by his loving wife of 47 years, Maria Amygdalou Thomas, whom he married on March 11, 1962 and who passed in 2009.

A Funeral Service will follow at 11:30 AM at the church.

Following the funeral, the interment will take place at Wiltwyck Cemetery.

Simpson-Hammerl Funeral Home is honored to assist the family with the arrangements.
To order memorial trees or send flowers to the family in memory of George Thomas, please visit our flower store.