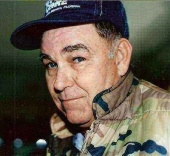 Harold J. Halwick of East Side Hill, Ruby died Saturday morning, May 26, 2007 at his home after a long illness. He was 76. He was born in Kingston on November 8, 1930, a son of the late Harold J. and Viola L. Russell Halwick. He was raised in Lake Katrine and built his home in Ruby over 50 years ago. On January 27, 1951 he married Joan Closi. From 1950 – 1954 Mr. Halwick served in the US Navy during the Korean Conflict. He received the Navy Occupation Medal with European Clasp. Mr. Halwick was a longtime member of the Operating Engineers, Local #825. He enjoyed hunting and spending time at his cabin in the woods with his dogs. Since the 1940's he played in a country band 'The Hudson Valley Boys.' They performed at square dances until the 1970's. One brother Floyd Halwick died previously. Surviving in addition to his wife Joan 'Tessie' are three daughters Debbie Martin and her husband Dick of Plains, Montana, Sherry Ralph and her husband Tim of Ruby, Tracy McGinnis and her husband Bob of Ruby; one son Jimmy Halwick and his wife Denise of Saugerties; one brother Leon Halwick of Bethlehem, PA; eight grandchidren Tony Martin, Alisha, Jarrett and Logan Halwick, Jimmy Brown, Michael Zehnich, Angelo Ralph and Britny Malloy; five great grandchildren, many nieces and nephews. His dogs Dinky, Girl, Boy and Tuffy also survive. Reposing at the Simpson - Gaus Funeral Home, 411 Albany Ave. on Monday from 7-9 PM. The funeral will be Tuesday at 12:00 at the funeral home, Rev. Thomas Goodheart will officiate. Interment will be in Mt. Marion Cemetery. Memorial contributions may be made to Hospice, Inc., 34 Broadway, Kingston, NY 12401.
To order memorial trees or send flowers to the family in memory of Harold J. Halwick, please visit our flower store.