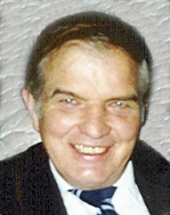 Harry P. Blaber, of Delaware Ave., Kingston died Monday, February 09, 2004 at his residence. He was 68. He was born in Brooklyn on January 22, 1936, a son of the late Dr. Reginald and Josephine Reed Blaber. Mr. Blaber served in the US Navy from 1955 - 1957 on the USS Intrepid. He belonged to the USS Intrepid Association. He married Barbara Ann Browne on December 26, 1954. An area resident for the past 40 years, he was a parishioner of the Immaculate Conception Church. For 35 years Mr. Blaber was a sales representative for Canfield Supply Co., Kingston. Prior to his illness he was employed at Sears as a heating/air conditioning system salesman in the Hudson Valley. Mr. Blaber received a certificate of commendation, from then Governor Mario Cuomo, for his dedication as a foster parent for over 100 children over 35 years. Surviving in addition to his wife of 49 years are three daughters Barbara O'Callahan of New Fane, Vt., Mary Jo Loughlan of Petersburg, N.Y., and Patricia Blaber of Washington (state); four Sons, Barry Blaber of Stevensville, Md., Matthew Blaber of Hurley, David and Jeremy Blaber, both of Kingston, N.Y.; one foster son P.F.C. Daniel Lee Hamilton, Kingston; one Sister, Irene Giglio of Stone Ridge, N.Y., three Brothers, Reginald Blaber of Rockaway, N.J., Ronald Blaber of Bullhead, Ariz., and Dr. Richard Blaber of Delmar, N.Y.; sixteen grandchildren, many nieces and nephews. Reposing at Simpson – Gaus Funeral Home, 411 Albany Ave. on Thursday 2-4 and 7-9 PM. Family and friends will gather at the Immaculate Conception Church on Friday for a 10:00 Funeral Mass. A committal service will follow at Wiltwyck Community Mausoleum prior to cremation.
To order memorial trees or send flowers to the family in memory of Harry Patrick Blaber, please visit our flower store.