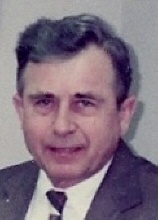 Heinrich P. Eckert, 86, of Kingston, died Monday, March 16, 2015 at HealthAlliance Hospital Broadway Campus. Born in Altheim, Germany, he was a son of the late Peter & Elsbeth Roth Eckert. For many years, Henry worked as store manager for Style Fabrics of Kingston. After Style Fabrics closed he worked as book-keeper for the Schott Corporation. He was a member of the Kingston Maennerchor & Damenchor. He enjoyed gardening, wildlife, his many friends, and traveling to Germany to visit his relatives, especially his sister. Henry is survived by a sister Frieda Herdt and a niece, Siglinde Herdt, both of Altheim, Germany, as well as many other nieces and nephews. In addition to his parents, Henry was predeceased by five siblings: Ludwig, Elsbeth, Gretel, Annemarie, and Adolf Eckert. Henry will be reposing at the Simpson-Gaus Funeral Home, 411 Albany Ave. on Friday, March 20, 2015 from 4-7 PM. A graveside service will be held on Friday April 17th at 2:00 pm at Mt. Marion Cemetery.
To order memorial trees or send flowers to the family in memory of Heinrich Eckert, please visit our flower store.