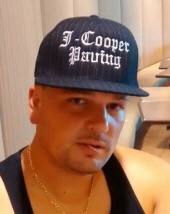 Jack Cooper,JRock, 35, of Latham, died Tuesday, August 29, 2017 at Albany Medical Center. Born in Hudson, he is a son of Donna Noonan and Rodney Cooper, Sr. and his wife, Teresa G. Cooper. In addition to his parents, Jack is survived by six children, McKayla Pado of Nichols, NY, Olivia Curren, Owego, Emily Cooper of Berkshire, Anthony Fiorelli of Apalachin, Jack Cooper, Jr of Broadalbin and Isabella Cooper of Broadalbin, eight siblings, Rhonda Cooper of Nichols, Rodney Cooper and his fianc, Dawn Brooks of Latham, Theodore Cooper of Nichols, Monica Jennings of Sidney, Roberto Gonzalez of Albany, Teresa Whalen of Oswego, Jacqueline Serrano of Brooklyn and Margarita Serrano of Oswego. Many nieces and nephews also survive and a very large extended family, also survive. Jack will always be with us and greatly missed, his generosity and loving smile, will forever be in our hearts. Jack will be reposing at the Simpson-Gaus Funeral Home, 411 Albany Ave. on Saturday, September 2, 2017 from 10:00 AM to 12:00 PM. A funeral service will follow at the funeral home at 12:00 noon. Interment will follow in Wiltwyck Cemetery.
To order memorial trees or send flowers to the family in memory of Jack Cooper, please visit our flower store.