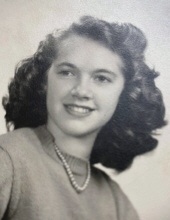 Born in Kingston, she was a daughter of the late Joseph l. & Anna R. Augustine Diamond.
Jean was a graduate of Kingston High School, Class of 1946 where she was President of the Language Club and a member of Leaders Club.

In 1950 Jean started her own business, Jean DeLuca Distinctive Millinery. (Hat Making). She regularly traveled to New York City for supplies. She also was a Salesperson at Flah’s for many years. Afterwards, she joined her husband in his family business. Jean was also proud of her prize-winning Quilt, that was written of in Quilters Magazine in1983.
Jean is survived by two daughters Sharon DeLuca, Mrs. James (Barbara) Secreto, a son, Vincent M. DeLuca, and his wife Marienne, 8 grandchildren and 9 great grandchildren and many nieces and nephews also survive.

In addition to her parents, Jean was predeceased by her husband of 71 years, Vincent P. DeLuca, her youngest daughter Jeanne E. DeLuca Jones, three brothers, Joseph, Ronald, and Robert Diamond.

The funeral procession will form from the funeral home on Monday at 9:00 AM.

The funeral mass will be celebrated at 10:00 AM at Saint Mary's Church.

The family would like to thank Hudson Valley Hospice for their kind and compassionate care of Jean during her final months.

In lieu of flowers the family requests donations be made to St. Mary’s Church, 180th Anniversary, Attn. Fr. William Scafidi.

Simpson-Hammerl Funeral Home is honored to assist the family of Jean with the arrangement.
To order memorial trees or send flowers to the family in memory of Jean DeLuca, please visit our flower store.