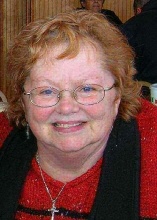 Joan Agnes Torgersen, 68, entered into eternal life on Saturday, December 25, 2010 at The Vassar Brothers Hospital. Joan was an employee at Mother Earth Storehouse for 25 years, and it was one of the many joys in her life. She was a faithful member of the Fountain of Life church. She was a friend and mother to all who knew her. She enjoyed crocheting, reading, watching movies, playing poker, spending time with her family and reading the bible. Joan was born in Brooklyn; she was the daughter of Francis and Agnes Cooper. She is survived by her husband Andrew Torgersen. Three sons: Andrew Torgersen Jr., Edward Torgersen and Eric Torgersen. Three daughters: Helen Shaw, Rachel Torgersen and Kerri-Ann Torgersen. Seven grandchildren: Leanna Torgersen, Kaitlyn Baker, Nicholas Baker, Hannah Torgersen, Devon Augustine, Caedan Torgersen, Benjamin Moulton. One great-grandchild: Sophie Torgersen. She is survived by three brothers: Frank Cooper, James Cooper and John Cooper. A Memorial Service will be held on Thursday, December 30, 2010 at 10 am at the Fountain of Life Church located at 71 Old Kings Highway in Lake Katrine. In lieu of flowers, contributions will be accepted for a memorial plaque to be placed at a later date. Please send contributions to: Kings Fire International, 865 Neighborhood Rd, Lake Katrine, New York and memo it to the Torgersen Family.
To order memorial trees or send flowers to the family in memory of Joan Agnes Torgersen, please visit our flower store.