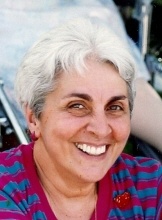 Joan M. Dittus, 81, of Kingston, died Thursday, February 23, 2017 at Golden Hill Nursing & Rehabilitation Center. Born in Kingston, she was a daughter of the late Joseph & Carmela Naccarato Sottile. For many years Joan worked in the cafeteria at Kingston High School. She also volunteered at Golden Hill Nursing & Rehabilitation Center. She was a New York Mets fan and she enjoyed crossword puzzles and word find puzzles. Mostly, Joan enjoyed watching her children and grandchildren play sports. Joan is survived by her two children, Lisa Dittus of Kingston and Michael J. Dittus and his wife Denise of Saugerties. Two grandchildren, Matthew and Joseph and her dog, Niki, also survive. In addition to her parents, Joan was predeceased by her husband of 49 years, Joseph A. Dittus, who passed in 2011. Joan will be reposing at the Simpson-Gaus Funeral Home, 411 Albany Ave on Monday, February 27, 2017, from 4-7 PM. The funeral procession will form from the funeral home on Tuesday at 9:00 AM. A Funeral Mass will be celebrated at 10:00 AM at St. Mary's Church. Interment will follow in St. Mary's Cemetery. The family would like to express their appreciation to the staff at Golden Hill for the compassionate care they provided, over the years to Joan. Online condolences may be left for the family of Joan by visiting www.SimpsonGaus.com
To order memorial trees or send flowers to the family in memory of Joan M Dittus, please visit our flower store.