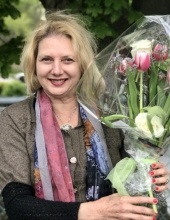 Joanne Michaels passed away peacefully on December 15th, 2020, at the age of 69. She was a victim of this tragic pandemic, which has cruelly taken so many lives.

Joanne was a publisher, journalist, and author of ten books, most of which focused on the Hudson Valley region of upstate New York, where she made her home. Her books included The Hudson Valley and Catskill Mountains: Only the Best Places, Hudson River Valley Farms, Hudson River Journey, Hudson River Towns, Adirondack High, and Famous Woodstock Cooks. She wrote her first book at age 32, titled Living Contradictions: The Women of the Baby Boom Come of Age. This book gave voice to the women of her generation and the new ideas they had about family, career, sexuality, marriage, politics, and personal values. Published by Simon & Schuster, it was translated into several languages—from Japanese to Norwegian—and has been used as source material in graduate-level women’s studies courses.

Joanne graduated from the University of Connecticut with a Bachelor of Arts degree in English, after which she moved to New York City to work in publishing as an editor at Simon & Schuster, Viking Press, St. Martin’s Press, and David McKay Publications.

In 1981, she moved upstate to Woodstock and took a position as editor-in-chief of Hudson Valley Magazine. The same year, she married Stuart Ober, whom she met at a publishing conference. Two years later, their only child, Erik, was born. After their divorce in 1995, she turned lemons into lemonade, publishing The Joy of Divorce, a book of humorous quotes to lighten the load of fellow divorcées. This book received national attention, leading to appearances on several talk shows including The Phil Donahue Show. Joanne then turned to local television, hosting and producing a regionally syndicated cable talk show called The Real Story. Guests included local politicians and judges, as well as individuals involved with Hudson Valley travel.

Joanne was entrepreneurial, starting her own publishing company, JMB Publications. In addition to publishing her own books, she distributed books by other authors on topics related to the Hudson Valley region. She loved her work and was always enthusiastic about the people and experiences it brought to her life, as well as her extensive travels.

A member of The Authors Guild, she has been a contributing writer for New York Magazine, Publishers Weekly, The Village Voice, Redbook, Self, Brides, Working Mother, Wine Enthusiast, Capital Region, and Hudson Valley. An article she wrote concerning the sex abuse at West Point’s day care center (Redbook, January 1986) was nominated for an American Society of Magazine Editors journalism award for investigative reporting. For 25 years, Joanne was a member of the Board of Trustees of the Roosevelt Vanderbilt Historical Association. She also taught journalism and publishing at Marist College in Poughkeepsie, New York.

Joanne is survived by her loving family: her mother, Renée, her sister, Nancy, her son and daughter-in-law, Erik & Diana Berlin, and her grandchildren, Cooper & Bentley Berlin. She will be greatly missed by all who loved her.

Joanne was a true force of nature. She devoted herself to justice and was incredibly smart, strong, and passionate about her beliefs. In lieu of flowers, her family requests donations be made to Planned Parenthood, an organization whose work she fiercely supported. Her family would like to express their gratitude for all the ways Joanne’s community has shown up for her in this season of separation.

In light of the pandemic, a memorial has been postponed until it is safe and responsible for family and friends to gather.
To order memorial trees or send flowers to the family in memory of Joanne Michaels, please visit our flower store.