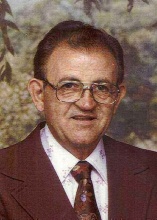 John 'The Barber' Bertone of Glen St., Kingston died Sunday, April 10, 2005 at his home. He was 83. John was born in Castiglione, Sicily, Italy on February 6, 1922, a son of the late Carmelo and Carmela Tornatore Bertone. He immigrated to this country in 1937 and settled in New York City. A WW II veteran in the US Army, he served in Panama. He moved to Kingston in 1952. John worked as a barber for 50 years. In 1953 he opened John's Barber Shop on Washington Ave., Kingston. He retired in 1998 but continued to barber there until last year. He was a parishioner of St. Joseph's Church. Surviving are his wife Maria C. 'Tina' DiBella Bertone; two sons Carmine Bertone and his wife Linda of Hurley and Dr. Joseph Bertone and his wife Melba McGee of Upland, CA; one daughter Tina M. Siragusa and her husband Peter of Chapel Hill, NC; two brothers Isadoro 'Ted' Bertone of Florida and Vincent Bertone of Delaware; four grandchildren Jennifer Lyn Bertone, John B. Siragusa, John 'JEB' Bertone and Olivia M. Siragusa; many nieces and nephews. Reposing at the Simpson - Gaus Funeral Home, 411 Albany Ave. on Tuesday 2:00 - 4:00 and 6:00 - 9:00 PM. The funeral will be Wednesday at 9:15 AM from the funeral home. A Funeral Mass will be celebrated at St. Joseph's Church at 10:00 AM. Entombment will be in Wilwyck Community Mausoleum.
To order memorial trees or send flowers to the family in memory of John Bertone, please visit our flower store.