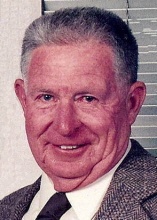 John J. McCloskey of Warren St., Kingston died Wednesday, March 27, 2013 at HealthAlliance Hospital Broadway Campus. He was 74. A native and lifelong Kingston resident, he was the son of the late William and Katherine Buchanan McCloskey. A Kingston High School graduate, Class of '57, John served at Ft. Bliss, TX in the US Army from 1960 1962. He was a member of the American Legion Post #150, Kingston. John married Philis Sior on January 21, 1967. John first worked for McCullough and Murphy construction. He then began a 32 year career with the Ulster County Highway Department as a heavy equipment operator. He retired in 1998. Loving husband of Philis McCloskey, father of Jayne McCloskey, Shawn McCloskey and his wife Patricia, Andrew McCloskey and his wife Andria all of Kingston; grandfather of Kevin, Julia, Cl and Wyatt McCloskey. John was predeceased by all of his brothers and sisters: Catherine McCloskey, William Jr., Eleanor Cappillino, Francis, Robert and Gerard McCloskey, Theresa Schrader, Michael and Philip McCloskey. Many nieces and nephews also survive. Reposing at the Simpson Gaus Funeral Home, 411 Albany Ave. on Monday 2-4 and 7-9 PM. The Kingston Post #150 American Legion will conduct a ritual on Monday at 7:30 pm. The funeral procession will form on Tuesday at 9:15 am from the funeral home. A Funeral Mass will be celebrated at St. Joseph's Church at 10:00 am. A committal service will follow at Wiltwyck Mausoleum. Inurnment will be in St. Mary's Cemetery at a later date.
To order memorial trees or send flowers to the family in memory of John J. McCloskey, please visit our flower store.