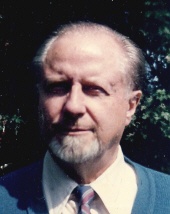 John L. "Jack" Grogan, 90 of Harding Ave, died Thursday, September 24, 2015 at his home. Born in Tuckahoe, NY, he was the eldest son of the late Frank & Mary Begg Grogan. He was inducted into the Army Airforce in his senior year of high school and served in the Pacific Theater as an Airforce radar operator during WWII. Later he worked in Europe in the refugee assistance program of the National Catholic Relief Services. He was a graduate of Iona College and the School of Social Work of Catholic University in Washington, D.C. As a certified psychiatric social worker, he first came to Kingston in 1959 and was hired as the first social worker for the Children's Home then located on Eastchester St. In 1962 he joined the Astor Home for Children and remained there until his retirement in 1988. He then worked several years for Personal Performance Consultants as a counselor. Following the death of his infant grandson, Jared Fisher, a victim of a drunk driver in 1979, he received a grant from the National Highway Traffic Safety Administration to initiate a court-watch program in four counties. Called Project ACE, (Alcohol Community Education) its purpose was to document the way drunk driving defendants went through the court system. Jack was also a member of the U.C. Stop DWI Committee, as well as a member of the UC Community Action Committee. He was Chairman of Mid-Hudson RID (Remove Intoxicated Drivers) for many years. He was a daily communicant at St. Joseph's Church and also a member of the prayer group at the Perpetual Eucharistic Adoration Chapel of Kingston. He was an active supporter of the Pro-Life movement and a volunteer at People's Place. Besides helping to raise 7 children, he enjoyed playing tennis, reading newspapers, restoring furniture, fighting the ills of society and watching the Yankees. Jack is survived by his wife of 57 years, Janine Vier Grogan, four sons, John and his wife Carol of Omaha, NE, James and his wife Aidi of Dominica, WI, Paul of Las Vegas, NV, and Daniel of Schenectady, three daughters, Jeanne Fisher of Kingston, Kate Kacur and her husband Brent of Kingston, Marianne Daoust and her husband Douglas of Troutdale, OR, 10 grandchildren, Sarah, Alyssa, Daniel, Lauren, Ryan, Brandon, Mason, Madeleine, Jack & Kerry, and one great grandson, Jaxson. Three sisters, Agnes Palumbo of Mt. Kisco, Mary Grogan of Peekskill and Katherine Golia of Somers as well as two brothers, Joseph Grogan of Ft. Washington, PA and Frank Grogan of Centerville, OH, all of whom loved to sing together. Jack will be reposing at the Simpson-Gaus Funeral Home, 411 Albany Ave, on Sunday, September 27, 2015 from 3-6 PM. The funeral procession will form from the funeral home on Monday at 10:00 AM. A Funeral Mass will be celebrated at 11:00 AM at St. Joseph's Church. Military honors by Joyce-Schirick Post 1386 Color Guard, will be follow at the Wiltwyck Mausoleum. Interment will be private. In lieu of flowers, the family requests that contributions in Jack's memory may be made to Birth Rights at 6 Adams St, Catholic Charities Building, Kingston, NY or Hudson Valley Hospice, 400 Aaron Ct., Kingston, NY 12401 Online condolences may be left for the family of Jack by visiting www.SimpsonGaus.com.
To order memorial trees or send flowers to the family in memory of John "Jack" Grogan, please visit our flower store.