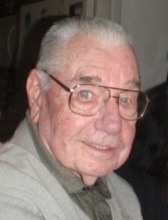 John "Jack" J. Denter, Sr., 90, of Red Hook, formerly of Kingston, died Tuesday, July 7, 2015 at VA Hudson Valley HCS, Castle Point. Born in East Kingston, John was a son of the late Frank & Ann McManus Denter. He was a veteran of WWII having served in the Army Air Force. John was an airplane armor gunner and a POW in various German prison camps from September of 1944 to May of 1945. After the war, he returned to Kingston, where he was a superintendent with the Star Brickyard until 1964. He then founded the Denter Sand & Gravel Company where he was the owner and operator until his retirement in 1990. John is survived by his son, John J. Denter, Jr., and his wife Linda of Kingston, two grandchildren, Michele Boughton and her husband Roger of Ulster Park, Denise Hand and her husband Rob of Kingston, four great grandchildren, Zachary and Brandon Williams, Austin Hand and Tanner James Boughton, two brother in laws, Vincent Perry and his wife Mary of Kingston and Charles Naccarato of Kingston. Many nieces and nephews also survive. John was predeceased by his wife Louise Perry Denter, whom he married on May 11, 1947 and who passed in 2009, his five siblings, Frank Denter, Dolores Witkowski, Helen Nerone, William Denter and James Denter. John will be reposing at the Simpson-Gaus Funeral Home, 411 Albany Ave. today, Thursday, July 9, 2015, from 4-8 PM. The funeral procession will form from the funeral home on Friday at 9:00 AM. A Funeral Mass will be celebrated at 10:00 AM at St. Colman's Church. Interment with military honors will follow in St. Mary's Cemetery. The family requests that memorial donations be made to VA Hudson Valley HCS, Castle Point, 41 Castlepoint Rd. Wappingers Falls, NY 12590.
To order memorial trees or send flowers to the family in memory of John "Jack" J. Denter, Sr., please visit our flower store.