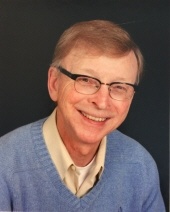 John L. Shaloiko, 63, of Ruby, died March 29, 2015 at home, following a 3-year courageous battle with cancer. Born in Lockport, NY, he was the son of the late John F. and Antoinette J. (Mazurek) Shaloiko.John was a 1969 graduate of St. Francis High School (Athol Springs), and graduate of St. John Fisher College in Rochester, NY. He received an MLS in library science from SUNY Geneseo. John's career in the library field began as an intern at the Library of Congress in Washington DC. From there he worked at St. John Fisher College as reference librarian in charge of media and responsible for the development of a library media center. He worked as a young adult librarian/AV specialist at Gates Public Library, then moved on as an Intersystem Pilot Project Coordinator at the Rochester Regional Library Council. Five years later John and his family moved to Dublin, Ohio where he worked as Liaison Officer for the Online Computer Library Center, then returned to his home town of Buffalo at the Western New York Library Resources Council eventually becoming the assistant director. The remaining 22 years of his librarianship was spent in the Hudson Valley as Executive Director of the Southeastern New York Library Resources Council in Highland. When John arrived there was one computer for seven staff members; nothing was automated. Within a short period of time all staff got computers and the first website went live. Under John's direction, technological services were developed to support programs for hospital and special libraries. John negotiated additional licensing agreements to create electronic regional interlibrary loan services. SENYLRC became the first NY regional council office to offer shared digital assets of member libraries under the name Hudson River Valley Heritage. John's dedication to library services was recognized statewide, receiving the ASLS/NY3R's Spirit of Librarianship Award. He retired in 2014. John was a member of St. John the Evangelist Parish in Saugerties, and served as Extraordinary Minister of the Eucharist. In addition to enjoying family time and a love for the Adirondacks, John had a passion for gardening and plants of all kinds, especially the art of bonsai. He was an avid fan of the Buffalo Bills and Sabres sports teams. John is survived by his wife of 34 years, Joanne Strauss Shaloiko of Ruby, whom he married on May 3, 1980, a daughter, Jessica LaFera and her husband, Adam of Hurley, a son, Craig Shaloiko of Manhattan, a sister, Toni (Bill) Mease, two brothers, Jim (Rita) Shaloiko and Dave Shaloiko. Several cousins, nieces and nephews also survive. In addition to his parents, he was predeceased by sister-in-law Mary Ann Shaloiko. John will be reposing at the Simpson-Gaus Funeral Home, 411 Albany Ave. on Monday, April 6 from 3:00 PM 8:00 PM. The funeral procession will form from the funeral home on Tuesday at 8:45 AM A Funeral Mass will be celebrated at 10:00 a.m. at St. John the Evangelist Church, 915 NY-212, Saugerties. Interment will be privately held. The family requests that memorial donations be made in John's memory to the New York Library Association's "Fund for the Future", http://bit.ly/1BJNuoz, or Memorial Sloan Kettering Cancer Center, giving.mskcc.org
To order memorial trees or send flowers to the family in memory of John L. Shaloiko, please visit our flower store.