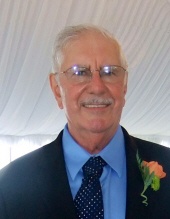 John R. Mazzuca, 77, of Kingston, died Tuesday, July 1, 2014 at Ten Broeck Commons. Born in Kingston, he was the son of the late John J. & Lena Patti Mazzuca. John worked for IBM for over 20 years and then worked for Markertek in Saugerties before retiring in 2009. He enjoyed tinkering in his garage, writing music, photography, fishing, camping, spending time outdoors and spending time with his family. In addition to his parents, John was predeceased by his wife of over fifty years, Cathleen Bradley Mazzuca, who passed in 2009. John is survived by his three children, Shawn Mazzuca of Connecticut, Darla DiMurro and her husband Anthony of Sierra Vista, AZ, Lynette Tobey and her husband Adam of Woodstock, one sister, Teresa Herzog of Saugerties, six grandchildren, Anthony DiMurro, Brian DiMurro, Miranda Hagadorn, Sarah Galloway, Emily Galloway and Ethan Tobey, two great grandchildren, Piper and Olivia. John will be reposing at the Simpson-Gaus Funeral Home, 411 Albany Ave. on Monday, July 7, 2014 from 2-4 and 7-9 PM. The funeral procession will form on Tuesday at 9:00 AM. A Funeral Mass will be celebrated at 10:00 AM at St. Mary's Church. Interment will follow in St. Mary's Cemetery. The family requests that memorial donations be made to Parkinson's Disease Foundation, 1359 Broadway - Suite 1509, New York, NY 10018
To order memorial trees or send flowers to the family in memory of John R. Mazzuca, please visit our flower store.