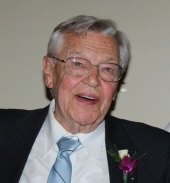 John C. Tuma, 93, died on July 4, 2018 at Vassar Brothers Hospital after a short battle with bone cancer. Born in Vienna, Austria, he was the only son of the late Dominick and Theresa (Merkel) Tuma. John graduated as a civil engineer from the Technical University of Vienna in 1949 and entered the U.S. in 1953. He worked for various steel and concrete construction companies in NYC and land developers on Long Island. John lived and raised his family initially in Middle Village, Queens and then moved to Hicksville, Long Island in 1964. He began working for Korfund Dynamics Corp. of Westbury, Long Island in 1966, specializing in seismic and shock-proof foundations. Among other notable projects, John was the principle designer of the seismic foundation for the 23-ton atomic resolution microscope at the University of California. He retired as chief engineer in 1988 and did consulting work for a few years thereafter. Instead of retiring to Florida as originally planned, John and his wife moved to Hurley, N.Y. after they fell in in love with the area during his many visits to his son in Kingston. He was an avid bowler right into May of this year (usually every Tuesday and Thursday mornings at Patel's Kingston Lanes), and spent many Saturday mornings taking his grandsons to junior league bowling. John enjoyed long walks at Dietz Stadium and along the 209 rail trail. His wife, Theresa ("Terry"), whom he married in 1954, predeceased him in 2011. Together they enjoyed spending time with the grandsons and visiting the Rondout area, the Ashokan Reservoir, and Lake George. John is survived by his daughter Marlene of Manhattan and her companion Daniel Marks of Kingston, son Garry and his wife Mary of Kingston, grandson John II and his wife Jessica of Saugerties, grandson Garry Jr. of the Bronx, and many nieces, nephews, and cousins. John will be reposing at the Simpson-Gaus Funeral Home, 411 Albany Ave on Tuesday, July 10, 2018 from 4-7 PM. The funeral procession will form from the funeral home at 9:00 AM on Wednesday. A Funeral Mass will be celebrated at St. Joseph Church at 10:00 AM. Interment will follow in Hurley Cemetery.
To order memorial trees or send flowers to the family in memory of John Tuma, please visit our flower store.