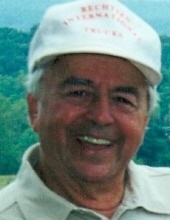 Born in Whitehall, NY, he was a son of the late Leon & Mabel Reyell Lacasse. Ken’s family
moved to Wawarsing when he was a toddler. He attended Ellenville High School. Ken enjoyed
sports, bowling, golfing and boating. His first love was bowling and travelling to the Nationals.
In 2017, he was presented with a plaque in recognition of his 45 consecutive years of
participation in the United States Bowling Congress. He was past president, past vice president,
past secretary for the Kingston Bowling Association. Ken also was owner and operator of the
Lacasse Trucking Company.

Ken is survived by his wife of 54 years, Diane Post Lacasse of Hurley, whom he married on
October 15, 1966, and his sister, Pat Keener of Wawarsing. He is also survived by many
nieces, nephews, friends and neighbors.

In addition to his parents, Ken was predeceased by his two brothers, Donald & Norris Lacasse.

The funeral procession will form from the funeral on Tuesday at 9:00 AM.

Simpson-Hammerl Funeral Home is honored to assist the family of Ken with the arrangements.
To order memorial trees or send flowers to the family in memory of Kenneth Lacasse, please visit our flower store.