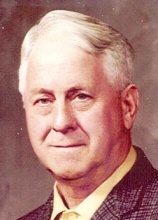 LeRoy Aaron Sheffer of Smith Ave., Kingston died Wednesday, December 10, 2003 in Kingston. He was 91. A native and lifelong Kingston resident, he was born January 29, 1912, a son of the late LeRoy and Mary Healey Sheffer. He married Margaret V. 'Peggy' Loughran on April 3, 1934. For many years Mr. Sheffer lived and worked on a Hudson River tug boat. He then worked for 17 years at Hudson Cement. A former volunteer fireman for Union Hose, he has belonged there for over 70 years. At age 67 Mr. Sheffer began employ as a parking lot attendant at the Ulster County Office Building. He worked there until his 90th birthday. His son LeRoy Sheffer died September 16, 1987. One sister Ethel and two brothers Wilson and Clifford all died previously. Surviving in addition to his wife Peggy of 69 years, are four grandchildren, Dr. LeRoy K. Sheffer of Kingston, Mrs. Margaret Sauer of Ulster Park, Kyle and Christian Sheffer, both of Ruby. Great Grandfather of Danielle, Eric Jr. and Joshua Sauer, Taylor and Leah Sheffel and Tyler Swart; several nieces and nephews. The wake and funeral have been reschedule. Reposing at the Simpson - Gaus Funeral Home, 411 Albany Ave. on Tuesday 7-9 PM. The funeral service will be conducted on Wednesday at 12:00 PM at the funeral home, Deacon Jack Peters will officiate. Interment in Montrepose Cemetery. Memorial contributions may be made to the American Heart Association, PO Box 3049, Syracuse, NY 13220-3049.
To order memorial trees or send flowers to the family in memory of LeRoy Aaron Sheffer, please visit our flower store.