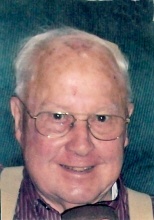 Louis V. Every, 93, a lifelong resident of Kingston, died October 1, 2014 at Golden Hill Nursing and Rehabilitation Center. Lou was employed as a foreman at Hercules Powder Co and then a driver for P. Ballantine & Son in Tillson. Beginning in 1973 he was the Superintendent of Sewer District for the Town of Ulster before retiring in 1986. He was a life member of Ulster Hose #5, former Boy Scout leader at St. James United Methodist Church, a member of the Town of Ulster Kiwanis, a parishioner of St. James United Methodist Church where he was member of the church administrative board and the "In-House Committee". He also collected food for the Clinton Avenue Methodist Church Food Pantry. Born in Kingston, Lou was a son of the late Vernon & Mabel Reil Every. Lou is survived by his wife Sally Cooper Every, a son, Richard Every and his wife Maureen of Saugerties, two grandchildren, Michael Every and Janet Every-Jameson, four great-grandchildren, Jessica Torrelli, David Jameson, Cory Every and Nicole Every and three great-great-grandchildren. One sister-in-law, Irene Russell, one niece, Stacey Russell, two daughters-in-law, Lois Every and Maryann Every also survive him. In addition to his parents, Lou was predeceased by his first wife, Virginia Decker Every who passed in 1993, two sons, Robert Every and David Every. A Funeral Service will be held at St. James United Methodist Church on Saturday, October 4, 2014 at 11:00 AM. Interment will follow in Wiltwyck Cemetery. In lieu of flowers memorial donations may be sent to the St. James UMC Board of Trustees, 29 Pearl St., Kingston, NY 12401. The family would like to thank the staff at Golden Hill, floor A-2, for their loving care and compassion for Lou.
To order memorial trees or send flowers to the family in memory of Louis V. Every, please visit our flower store.