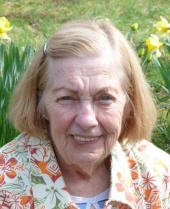 Marjorie A. Raffaldi, 89, of West Hurley, died Thursday, April 17, 2014 at Health Park Care and Rehabilitation Center of Fort Meyers, FL. Born in Minot, ND, she was a daughter of the late Elden & Ruth Martin Myers. Marjorie was an avid gardener who was a member of the Woodstock Garden Club and enjoyed her own gardens on Blueberry Hill. She was a member of the Catskill 3500 Club, Lefooters Square Dance Club and an active parishioner of St. John's RC Church for 69 years. She worked for Sears in Kingston for over 20 years and she and her late husband Frank participated in running Torino's Inn, the family business from 1945 to 1965. They were also members of the Woodstock Motor Club where they enjoyed driving and showing their 1932 Chevrolet. She is survived by four children, Frank J. Raffaldi, Jr. of Lexington, KY, Thomas V. Raffaldi and his wife Barbara of West Hurley, John D. Raffaldi and his wife Lynn of Stanwood, WA and Marianne Molino and her husband Ernest of Fort Meyers, FL, two sisters, Doris Witzke of Modesto, CA, June Luckmann and her husband William of Champaign, IL, two brothers, Robert Myers of Grant Park, IL and Ralph Warner and his wife Lorraine of Broadway, VA, five grandchildren, Sondra Buono and her husband Gabriel, Michael Raffaldi, Brian Raffaldi, Erin Raffaldi, Jane Raffaldi, dear friend, Marie Bergenn of West Hurley and two great grandchildren, Samuel and Sophia and many nieces and nephews also survive. Marjorie was predeceased by her husband of 52 years, Frank J. Raffaldi, Sr whom she married on May 22, 1945 and who passed in 1997. Her brother, Elden Myers also predeceased her. Marjorie will be reposing at the Simpson-Gaus Funeral Home, 411 Albany Ave. on Wednesday, April 23, 2014 from 4-7 PM. The funeral procession will form on Thursday from the funeral home at 9:00 AM. A Funeral Mass will be celebrated at 10:00 AM at St. John's Church, West Hurley. Interment will follow in Tongore Cemetery. The family requests that memorial donations be made to Camp Tri Mount Endowment Fund, Rip Van Winkle Council BSA, 75 Pine St., Kingston, NY 12401 or WoundedWarriorProject.org
To order memorial trees or send flowers to the family in memory of Marjorie Raffaldi, please visit our flower store.