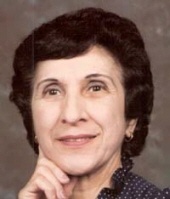 Mary Lucille Coughlin, formerly of Stony Run Apartments, Kingston died Sunday, May 24, 2009 at Ten Broeck Commons Nursing Home. She was 91. She was born in Manhattan on Decemeber 13, 1917 a daughter of the late Joseph and Josephine Martino Cusumano. Mary moved to Highland as a teen ager and graduated as Salutatorian of Highland High School, class of 1935. She later worked as a secretary at Highland High School. She married Charles "Babe" Coughlin on February 19, 1949. Mary and Charles moved to Kingston in the early 1950's. Mary then worked at the Benedictine School of Nursing and then at John A. Coleman Catholic High School until retirement in the early 1980's. A former member of the Catholic Daughters of the Americas, Mary was devoted to her family and loved baking and cooking. Her husband of 58 years died May 2, 2007. Three sisters Catherine Totten, Josephine Andre and Felimina Castellano, and one brother Tony Cusumano all died previously. Surviving are two daughters Kathy Swarthout of Kingston, Arlene Skellington and her husband Glenn of Salem, VA; one brother Kevin Coughlin and his wife Yonnie of Staatsburg; one sister Gloria Leo of Georgia; seven grandchildren Jennifer Schulze, Jonathan and Joanna Swarthout, Leia and Sara Thomas, Kelli and Kristi Coughlin; two great grandchildren Dylan Swarthout and Jaden Schulze; aunt of Linda Ellison, Michael, Joseph and John Marrine, Dennis Totten, Richard and Thomas Andre, Joseph Cusumano, John Fitzgerald and Jean Maxwell; one sister in law Eleanor Fitzgerald. Reposing at the Simpson - Gaus Funeral Home, 411 Albany Ave. on Wednesday from 4:00 - 8:00 p.m. The funeral service will be conducted on Thursday at 12:00 p.m. Interment will follow in St. Mary's Cemetery. Memorial contributions may be made to the Alzheimer's Association, 2 Jefferson Plaza, Suite 103, Poughkeepsie, NY 12601-4060.
To order memorial trees or send flowers to the family in memory of Mary Lucille Coughlin, please visit our flower store.