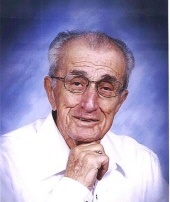 Austin, TX - Michael C. Abdallah, formerly of Kingston, died Thursday, October 16, 2003 at Sagebrook Health Center. He was 94. Michael C. Abdallah was born in Kingston, New York on December 20, 1908 to Shokry Morad Abdallah who immigrated to Kingston from Lebanon in the late 1890’s and Sophie Rohanna Salem Abdallah who was born in Kingston. “Mike”, as he preferred to be called, was married 47 years to the late Elena DeCicco of Kingston, with whom he had three sons, Mitchell and Betty of Miami, FL., Ron and Pat of Laredo, TX. and Norm and Brenda of Austin, TX. He is the proud grandpa of 19 grandchildren, Monica and Steve Andrews, Michelle Abdallah, Elena Abdallah and John Herr, Russell Abdallah, Rachelle Abdallah, Ryan and Geri Abdallah, Randall and Annette Abdallah, Robert Paul Abdallah, Christina and Jarod Abdallah-Boehm, Rebecca Abdallah, Genevieve and Jon Burkindine, Norman Jr. and Chela Abdallah, Koren and Mike Stark, Paula and Tom Pentecost, Megan Abdallah, Jannah Hodges and 22 great grandchildren, Matthew Andrews, Jack Andrews, Hazel Herr, Pema Herr, Michael Abdallah, Jacob Abdallah, Audrie Abdallah, Adam Abdallah, Madeline Abdallah, William Abdallah, Berman Abdallah-Boehm, Matthew Barnes, Benjamin Barnes, Jacob Barnes, Michael Thomas Abdallah, Robert Charles Abdallah, Geoffrey Abdallah, Zachary Stark, Rachel Pentecost, Ken Hodges IV, Vanessa Geary, Joshua Geary and Michael Geary. He worked for Forst Packing Company from 1924 to 1945, his last position being Credit Manager. He loved to tell the story of how he used to wait on Eleanor Roosevelt when she came in every month to by 20 – 30 pounds of hot dogs, saying she was one of the sweetest people he had ever met. During WWII he volunteered to watch for planes at the observation watchtower on top of the Stuyvesant Hotel in Kingston 2 – 3 nights a week. He was very active in fundraising for the Knights of Columbus in Kingston, especially their Charity Ball. In 1945 he went with Chance Vought Aircraft in Stratford, CT. as a cost statistician, transferring to the Dallas (Grand Prairie, TX) plant in 1949 and later to Sterling Heights, Michigan for his last 9 years with the company (by then Ling Temco Vought) as administrative assistant to the comptroller until 1973. While in Dallas he was President/Treasurer of the LTV Employees Club and especially enjoyed holding the Christmas Party for a children’s charity each year. He was also active on the Building Committee for St. Monica’s Church. On Friday and Saturday nights he worked a second job as the top salesman at Sears Shoe Department to help with his son’s college expenses. He retired with his wife Elena in 1973 to Laredo, TX. and enjoyed visits from all of his grandchildren and helped with the accounting side of his son Ron’s vending business. After being widowed in 1976 he was married in 1977 to Barbara Geary of Laredo for 19 years, most of which was in New Braunfels, TX. In 1999 he was named “Patron of the Year” by his grandson’s company for his sound business advice and his dedication to the promotion of his Johnny Carino’s Country Italian Restaurants. He could be seen having an O’Doul’s at the New Braunfels store and telling them how to run the place. The last seven years he has lived with his son Norm and wife Brenda, first in New Braunfels and then in Austin to be closer to his son’s job. He participated in the Knights of Columbus in to his late 80’s. In addition to being a member of Fr. Abram Assembly #799 Dallas, TX., he is an Honorary life member of the Fourth Degree Assembly, Kingston Council 275 (past Captain of the 4th Degree and Deputy Grand Knight). Mike has always had a zest for life. When people asked the reason for his longevity, he always responded; “Keep a young brain”! In recent years, whenever his nieces asked how he was doing he’d say: “from my head to my waist I feel 55 years old and from my waist to my toes I feel 95.” Reposing at Simpson-Gaus Funeral Home, 411 Albany Ave., Kingston on Sunday 2-4 and 7-9 PM. The funeral will be Monday at 9:15 from the funeral home. A Funeral Mass will be celebrated at St. Joseph's Church, Kingston at 10:00 AM. Interment will be in St. Mary's Cemetery, Kingston, NY. Memorial contributions may be made to Parent Project Muscular Dystrophy, 1012 North University Blvd., Middletown, OH 45042 or the St. Vincent DePaul Society, c/o St. Thomas Moore Catholic Church, 10205 Ranch Road 620 North, Austin, TX 78726-2210.
To order memorial trees or send flowers to the family in memory of Michael C. Abdallah, please visit our flower store.