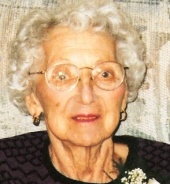 Mildred J. Herwig of Manor Place, Kingston died Monday, February 11, 2008 at the Golden Hill Health Care Center. She was 93. A native and lifelong Kingston resident, she was born January 21, 1915, a daughter of the late Edward and Martha L. Mickle Longto. For 17 years Mildred was a matron at J. Watson Bailey Junior High. She retired in 1978. A member of the Wiltwyck Gardens Seniors and Golden Age Club, she also belonged to A.A.R.P. and the C.S.E.A. She was a parishioner of St. Joseph's Church. Her husband Warren Lewis Herwig died March 25, 1966. One sister Lillian M. McBride died in 1990. Surviving are three sons Warren Herwig and his wife Joanne of Oshkosh, Wisconsin, Dennis Herwig of Kingston, Edward Herwig and his wife Susan of Kingston; one daughter Renaye Phillips and her husband Duane of Greeley, Colorado; one sister Evelyn "Bunny" Jubie of Kingston; eight grandchildren Warren J. and Elizabeth Halusan, Brian, Daniel, Erin, Douglas and Leslie Herwig and Kristen Phillips; three great grandchildren Allison, Stephen and Jacob Herwig and two nieces. Reposing at the Simpson - Gaus Funeral Home, 411 Albany Ave. on Friday, February 15, from 2-4 and 7-9 PM. The funeral procession will form on Saturday, February 16, at 9:15 AM from the funeral home. A Funeral Mass will be celebrated at St. Joseph's Church at 10:00 AM. Interment will be in St. Mary's Cemetery. Memorial contributions may be made to the Golden Hill "Activities Fund", 99 Golden Hill Dr., Kingston, NY 12401.
To order memorial trees or send flowers to the family in memory of Mildred J. Herwig, please visit our flower store.