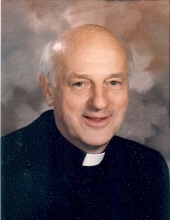 Born in Port Jervis, he was a son of the late George & Mary Lesnock Williams. Monsignor attended St. Mary’s Parochial School in Port Jervis and St. John’s High School in Goshen, before graduating from Cathedral College in New York City. He was ordained on May 30, 1959 in St. Patrick’s Cathedral by Cardinal Spellman. Monsignor was an assistant at St. Joseph’s Church in Kingston from 1959-1964, then an assistant at St. Gregory Church in Harrison, NY. He was Pastor at St. Joseph’s Church in Kingston from 1981-1994 and Pastor of St. John the Evangelist in Saugerties from 1994-2011 before retiring. He was appointed regional vicar of Ulster County in 1989 and named Monsignor in 1995.

In addition to his parish assignments, he also taught religion and was a counsellor at St. Ursula’s Academy in Kingston and Our Lady of Good Counsel High School in White Plains. In his spare time, Monsignor enjoyed golfing and traveling.

Monsignor has been extremely active in all church and community functions. He has served as Spiritual Advisor to the catholic daughters, the Newman club, Knights of Columbus, Boy Scouts and Cub Scouts; as director of St. Gregory the Great School, C.C.D.; as advisor to I.C.L.C.' Chaplain to the Harrison Fire Department and as a member of the Harrison Rotary Club.

Monsignor is survived by his two sisters, Virginia Condon and her husband William of Vancouver, WA and Anne Fonseca of the Bronx, and dear friends, Jean, Tera, Karisa and Jianna VanAmburgh.
In addition to his parents, Monsignor was predeceased by his sister, Faith Morley.

A Funeral Mass will be celebrated on Thursday at 10:00 AM at St. Joseph’s Church.
Interment will follow in St. Mary’s Cemetery, Port Jervis, NY.

Monsignor was involved with TEC, which is a diocesan spiritual movement for older teens and young adults. In lieu of flowers, the family requests that memorial donations be sent to TEC, 2241 Mendez Street, New Orleans, LA 70122

Simpson-Hammerl Funeral Home is honored to assist Monsignor’s family with the arrangements.
To order memorial trees or send flowers to the family in memory of Monsignor William Williams, please visit our flower store.