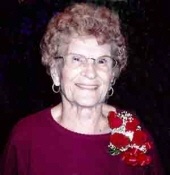 Nicolina A. Lasher of Chambers Drive, Town of Ulster died Sunday, December 20, 2009 at Kingston Hospital. She was 97. She was born in Glasco, a daughter of the late Joseph and Rosa Tiano Russano. Since age 16 she worked in the area garment industry as a presser and seamstress. She retired ini the 1960's. A parishioner of St. Joseph's Church, she was devoted to St. Jude. She belonged to the Chamber's Senior Citizens Club and the Senior Tea Party Club. Her son Vincent Joseph Lasher died November 14, 1996; her husband Vincent Lasher, five brothers Frank, Gabriel, Michael, Joseph, and Antonio, and one sister Theresa Madden all died previously. Surviving are her daughter Theresa Kouhoupt of Town of Ulster, her daughter in law Patricia Lasher of Town of Ulster, six grandchildren Kenneth F. Kouhoupt and his wife Susan, Karen Aubel and her husband Thomas, Kevin Kouhoupt and his wife Kim, Kim Hart and her husband Jerry, Keith J. Kouhoupt, and Aletha Rodriguez; eight great grandchildren Kristen Phillips, Shannon and Kerrie Hart, Thomas and Matthew Aubel, Kenneth Kouhoupt, Michael and Richard Rodriguez; one niece Rosemarie Markle and her anticipated great great grandchild. Reposing at the Simpson - Gaus Funeral Home, 411 Albany Ave. on Tuesday from 4:00 - 8:00 p.m. The funeral procession will form on Wednesday at 9:15 a.m. from the funeral home. A Funeral Mass will be celebrated at St. Joseph's Church at 10:00 a.m. Interment will follow in St. Mary's Cemetery.
To order memorial trees or send flowers to the family in memory of Nicolina A. Lasher, please visit our flower store.