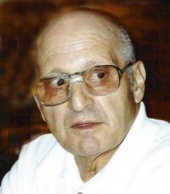 Pasquale S. 'Pop' Torchia of Glenview Drive, Glenford died Saturday, July 2, 2005 at Kingston Hospital. He was 84. He was born in Stockport on April 8, 1921, a son of the late Joseph and Mary Buffa Torchia. Pasquale was raised in Stockport and then moved to Hudson. A US Navy veteran of WW II, Mr. Torchia served on the USS Minneapolis in the Pacific Theater of Operations. For many years he worked as the head sprayers at LB Furniture Industries in Hudson. In the early 1970's he moved to Poughkeepsie and worked as head custodian for the Franklin Elementary School, Poughkeepsie. He retired in 1981. Pasquale most recently lived with his daughter in Glenford. His wife Myrtle Leona Felter Torchia died September 29, 1997. Three brothers, Anthony, Thomas and Ralph Torchia all died previously. Surviving are three daughters Mary Van Dyke and her husband Theodore of Glenford, Lee Ann Scism and her husband Sterling of Cairo and Kathy Cassera and her husband Johnny of Stockport; one son John Torchia and his wife Kelly of Quaryville; two sisters Rose Surrano and Lena Shufelt, both of Hudson; two brothers Frank Torchia of Hudson and Joseph Torchia of Albany; nine grandchildren Leona Myers, Timothy and Marsha Bain, Neil and Noel Scism, Maria and Jonathon Torchia, Faith Van Dyke and Candice London; 7 great grandchildren Adam, Trevor, Amber and Tiana Myers, Courtney Bain, Noah Winters and Jaisa London; many nieces and nephews. Calling hours will be conducted on Wednesday at the Living Word Chapel, Route 28A, West Hurley (338-6770) from 12:00 - 2:00 PM. A Funeral Service will then be conducted at 2:00 PM. Cremation will be private. In lieu of flowers, memorial contributions may be made... ............................. A Poem from Pasquale's great grandson, Trevor Myers (age 12) We all admit that we are sad, Because you've passed away. But we've come to understand, With God you will now stay. We take this time to think back to, the fun and joy we shared. Some may not have known how to show it, But 'Pop', we really cared. We'll all remember your helpfulness, You were always fixing things. You were and are more special to us, then a bag of diamond rings. When you first went in the hospital, You gave us all a scare. But we knew that you would be fine, Because we put you in God's care. We were with you when you threw food-fights, Some were with you when you died. Thank God you were a man that knew, Angels of Mercy were at your side. We love and miss you Popsie-Poo.
To order memorial trees or send flowers to the family in memory of Pasquale S. Torchia, please visit our flower store.