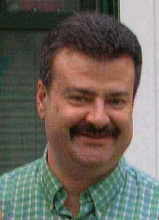 Paul K. Goldstein of Washington Ave., Kingston died Saturday, December 22, 2007 with his wife and daughter at his side after a battle with cancer, at Vassar Brothers Medical Center. He was 49. He was born in Philadelphia, PA, a son of Irwin and Beverly Bruntil Goldstein. A Kingston High School graduate, class of ’76, he married Alice M. Hendickson on June 28, 1990. Formerly of Dutchess County, Long Island, Wisconsin, and Pennsylvania, Mr. Goldstein has lived in Kingston for the past year. He was vice president of MoDent, Inc. (a dental supply company) in Saugerties and worked there from 1973 – 1991. He was a member of the Dental Dealers of America. He has since worked at various dental supply companies in several states. Surviving in addition to his wife, Alice, and his parents of Carlsbad, CA; are one daughter Stephanie Goldstein of Kingston; two brothers Lee Goldstein and his wife Dawn of Hurley and Neil Goldstein and his wife Marti of Kingston; three step daughters Phyllis Lane and her husband LeRoy of Ashokan, Tina Mackenzie and her husband Don of Accord, and Sarah Alexander and her husband Martin of Worthing, England; two step sons Maurice “Skip” Lane and his wife Brenda of Lake Katrine and Mark Lane and his wife Linda of Connelly; three nieces Jessica, Amy and Ashley; one nephew Alec; 15 step grandchildren. Funeral services will be conducted on Sunday at 3:00 PM at Temple Emanuel, 243 Albany Ave., Kingston, Cantor Bob Cohen will officiate. Inurnment in Montrepose Cemetery will be private. Memorial contributions may be made to a trust fund for his daughter: “Stephanie Goldstein Trust”, c/o Lee Goldstein, 175 Windsor Dr., Hurley, NY 12443.
To order memorial trees or send flowers to the family in memory of Paul K. Goldstein, please visit our flower store.