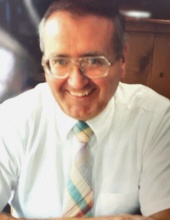 Paul was born in Burlington, VT to Stella (LaCrosse) and Ralph Provost who predeceased him in 1980 and 1983 respectively. He was one of five children born to Stella and Ralph.

Paul graduated from Cathedral High School in 1959 and St. Michael’s College in 1963.

Paul worked through school at Miles and Riley and then onto Vermont Transit Lines where he would continue working until 1988, moving up in the ranks, eventually leading it’s Tours and Charters Division, which meant a lot of opportunities for his family to travel to Montreal and Quebec for cultural and sporting events.

During his college years he met the love and adventure of his life, Catherine Healey. Paul and Cathy were married on July 18th, 1964, in Colchester, VT and were about to celebrate their 58th wedding anniversary this year.
During the early years of their marriage Paul also served in the Vermont National Guard.

He continued to stay connected to his College Alma Mater through various alumni events, eventually earning Alumni of the Year along with serving as Alumni President and on the Alumni Board of Advisors. He took great pride in advocating for a Varsity Level Hockey team for St. Michael’s College.

His Catholic faith sustained Paul and his belief in the Word of God gave him tremendous comfort. He led as a CCD teacher through the years along with serving on the Mount Mansfield Union District School Board, much to the chagrin of his daughters. He served on the parish councils of the churches that he attended. Paul was a 4th Degree Knights of Columbus and the enjoyed the opportunities presented to him to constantly give back to the communities that he lived in.

His leadership at Vermont Transit and later Adirondack Trailways in Kingston, NY, encouraged him to become more involved in the bus industry’s trade association, including but limited to the New England Bus Association. During his time in Vermont, he also served on the Lake Champlain Chamber of Commerce for many years. Not forgetting his roots of growing up in the “Old North End” Paul looked for ways to build that community up. After moving to Kingston, NY in 1988 to take on a VP position at Adirondack Trailways, Paul became a member of the Kingston Rotary club where he took delight in the Largest Pumpkin Contest during Kingston’s Fall Festival.

A consummate DYIer, no home was left untouched from Burlington, to Essex, to Jericho, to Burlington to Kingston, NY back to Hyde Park, VT. During their marriage Paul and Cathy found a love for showing Bearded Collies and become active members of the Champlain Valley Kennel Club for many years. He relished pulling pranks and no birthday was complete without a “sponge” cake or April Fools without sugar in the salt bowl. His appetite for puns was limitless and was a great source of amusements and groans from his family and friends.

Raising their children in Jericho, Paul and Cathy introduced them to “the other skiing” and created a Skiing Sunday tradition and would often be found XC through the farm fields in Jericho. Paul, like most self-respecting Vermonters, took to woods in the fall for Deer Hunting Season. We’re not quite sure how much hunting was accomplished, but Paul enjoyed this time out in the woods with Dan, his father in law and a hip flask.

A Funeral Mass will be celebrated at 11:00 AM at St. Joseph Church.

Interment will follow in Bushkill Cemetery in West Shokan.

In Lieu of flowers, donations may be made in Paul’s memory to Saint Michael’s College. One Winooski Park, Colchester, VT 05439 where a scholarship for VT students in need will be identified.

Simpson-Hammerl Funeral Home is honored to assist the family of Paul with the arrangements.
To order memorial trees or send flowers to the family in memory of Paul R. Provost, please visit our flower store.