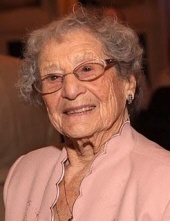 Born in the Bronx, New York City in 1917, she was the last surviving daughter of Nathan and Anna Ballin. Pauline was predeceased by her three sisters Hilda Strauss, Helen Dreskin, and her twin sister Sylvia Pawliger. She married Irving Delson in 1938 and lived with him in NYC and Saugerties until his death in 1996.

Recognizing and celebrating her wonderful life are her four children and their spouses, Jonathan Delson (and Julie Sitney) of Saugerties NY, Helen Sue (and Nachum) Fass of Philadelphia PA, Niki Delson (and Ron Kokish) of Carbondale CO, and Martin (and Rosemarie) Delson of San Jose CA, along with grandchildren Alan, Karyn, David, Oren, Ezra, Rudy, Monika, Andrew, Blake and Sky; and many cousins, nieces and nephews. She was fondly known as “GG” by her great-grandchildren.

Along with being a wife, homemaker, and mother, Pauline had been, over the course of her century of life, a folk dance teacher, crafts instructor and activities director at several Catskills resorts and at a nursing home in Brooklyn. At age 90, she went to Israel to volunteer on a community farm collective. She loved knitting and crocheting and was able to produce hats, sweaters and scarves without using patterns. She would go into a movie theater with a ball of wool, watch a movie, and come out with a finished sweater. She was born before women had the right to vote, and she was proud to have voted in every presidential election since Franklin D. Roosevelt. She volunteered at the polls every year well into her last decade.

During her last few years, Pauline would relax at her home in Saugerties with her wonderful aides, go for walks around the neighborhood, and enjoy the company of her many local friends, including those at the Woodstock Jewish Congregation. She was always friendly, outgoing and ready to offer help if asked.

Funeral arrangements will be private, but as Pauline was very fond of saying, “I don’t need it, and I don’t want it!”

A private graveside service will be held in MT. Hebron Cemetery in Queens, with Rabbi Jonathan Kligler from Woodstock Jewish Congregation, officiating.

Online condolences may be left for the family of Pauline by vising www.SimpsonHammerl.com
To order memorial trees or send flowers to the family in memory of Pauline Delson, please visit our flower store.