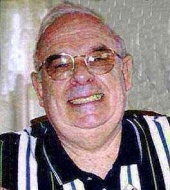 Percy S. Russell of Plymouth Avenue, Kingston died Thursday, February 16, 2006 at Benedictine Hospital. He was 71. Born in Woodstock on October 27, 1934, he was the son of Lillian Hommel Russell Warrington and the late Percy L. Russell. A graduate of Kingston High School, Percy entered the US Army in 1957. He served in the US Army Reserve until 1963. On June 14, 1959 he married Margaret Irene Cooper. For 35 years Percy was a printer at Rylance Printing, Kingston. In 1996 he joined the staff at Simpson - Gaus Funeral Home, Kingston. He retired in 2004. For 20 years (1970 - 1990) Percy served a Commissioner of the Kingston City Board of Public Works. A member of the St. James United Methodist Church, he served as president of the Board of Trustees and sang in the choir. An avid bowler, Percy bowled at Mannie's Bowling League at Mid-City Lanes, Kingston. His step father, Arthur A. Warrington died on February 29, 2000. Surviving are his wife of 46 years, Margaret Irene Russell, his daughter Stacey Jean Russell of Kingston, his mother Lillian Warrington of Kingston, his sister in law and brother in law Sally and Louis Every of Kingston. Aunts and cousins also survive. Family and friends will gather at St. James United Methodist Church on Monday from 10:00 AM for a viewing. At 11:00 AM a funeral service will be conducted by Rev. Jeffrey Glassey. Interment will be in Blue Mountain Cemetery, Saugerties. Contributions in Percy's memory may be made to the St. James Memorial Fund, 35 Pearl Street, Kingston, NY 12401. Be at peace good friend.
To order memorial trees or send flowers to the family in memory of Percy S. Russell, please visit our flower store.